How to make school schedule

One of the main school documents – is the schedule of lessons. It sets the rhythm of the workflow for the entire academic year. How well thought out schedule, by the competent load distribution depends largely on the quality of learning. 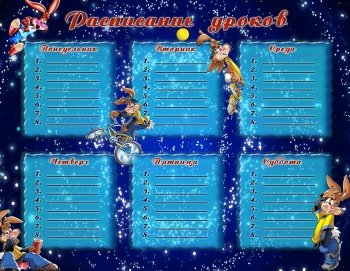 Related articles:
Instruction
1
Since the late 70-ies of the twentieth century for a uniform distribution of load within a week system is used the rank method, developed by Russian scientist G. I. Sivko. The point of the system that each of the subjects has a certain number of points (grade). Than the subject more complicated, the more the memory it requires, the higher the rank. Under this system, the highest rank of math (algebra, geometry) and Russian language – these subjects has 11 points. The second difficulty – foreign language 10 points. A little easier – physics and chemistry, each item in the ranking receives 9 points. 8 points the story, 7 – literature 6 – geography and science, only 5 points from physical education classes, 4 – class, 3 – sketching. The minimum load on the system from visual art lessons (2 points) and music (1 point). In addition to the level of difficulty is taken into account and the dynamics of fatigue throughout the week. According to scientists, the peak efficiency falls on Wednesday and Thursday. Dispensing lessons on days of the week, calculate the total amount of points for each day. The total load is distributed so that the maximum load fell on a Wednesday, and on Monday and Friday, it was minimal.
2
In addition to the distribution of subjects by days of the week you need to take into account the daily biological rhythms. Max health falls in the interval 10.00-11.30. It was at this time planning lessons that require maximum concentration, the most difficult. The first and last lessons should be items with less stress.
3
The need for automated preparation of school timetable with the sanitary rules and norms have led to the emergence of a number of programs which allow with varying efficiency to solve this problem. There are many such programs, and you can select the most suitable one.
Note
The schedule is set correctly if:
- the load is distributed evenly across all days of the week.
- some days are only lessons that require intellectual work and requires physical and creative activity;
- the highest number of points you have at the beginning and end of the week;
- items with the highest number of points are held the first and last lessons.
Useful advice
Signs of a properly drawn up schedule:
- maximum load falls in the middle of the week and middle of the day;
lessons that require intellectual and physical activity are alternated within one day;
- the most difficult subjects are taught on the 2nd, 3rd, 4th classes.
Is the advice useful?
See also
Подписывайтесь на наш канал