How to make a Tesla generator

Generator Tesla is a device created by a brilliant Serbian scientist Nikola Tesla in the nineteenth century. In industry the principle of operation of this generator is used in microwave ovens. In ordinary life, here already more than hundred years generator Tesla serves as an exciting entertainment to the public. Electrical discharges that are generated by this device can reach a length of several meters. Now we'll show you how to create a generator Tesla at home. 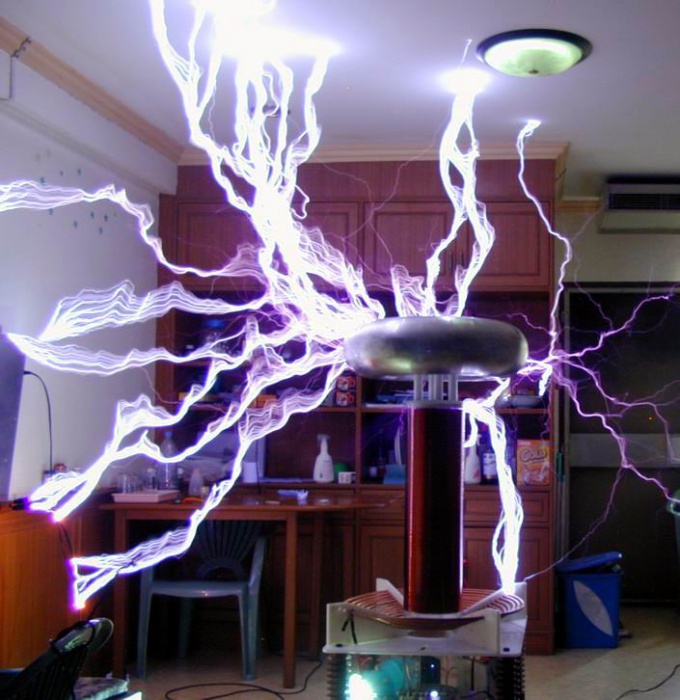 Related articles:
Instruction
1
In the first place to create this device it is necessary to think about the source of its power is electric current. It needs to have a voltage less than 5,000 volts. This is only necessary for a very simple generator Tesla. For more complex analogues of this device will require higher voltage.
2
The generator Tesla consists of the following elements. The first transformer. He is represented by two coils (primary and secondary). Also need a capacitor, a discharger, a special terminal and a donut. The primary coil must be done from a copper wire of large diameter or simple copper tube. If wire is used, it must be wound circumferentially in multiple turns. The secondary coil consists of a thousand or more turns of copper wire of small diameter. It should be noted that the primary coil is best done cylindrical horizontal or vertical form. Together with the capacitor it needs to create a so-called "oscillation circuit". This circuit includes the spark gap, which consists of two parallel copper wires with little clearance. Upstairs they have to be exposed and bent, and the bottom tightly wrapped duct tape.
3
The secondary coil comprises a toroid, which acts the function of a capacitor. It should be noted that the secondary coil has the sense to cover with epoxy resin, to eliminate the possibility of electrical breakdown during operation of the device. It should also be noted that in any case it is not necessary during operation of the generator Tesla touch out electrical discharges. This can lead to serious consequences for your health in the future.
Note
The basic idea of Nikola Tesla in the search of the eternal and infinite energy source to draw energy from the "ether", i.e. to use the energy of Earth and space. If Nikola Tesla knew it as possible, the modern pseudo-inventors (but simply Scam artists) are naive-for-sale "eternal generators of Tesla".
Useful advice
The mathematical apparatus on the basis of the views of "long-range" have brought physics to a standstill. The principle of operation of such a facility as a generator or Tesla gray, it is impossible to understand in terms of "forces" and "fields" (magnetic field, electric field, Lorentz force, Coulomb force ...). Analyze the processes occurring in the Tesla generator, with the principle of close-range interaction".
Is the advice useful?
See also
Присоединяйтесь к нам
New advices