How to make mushroom soup

Mushroom soup is a great basis for making a wide variety of liquid and puree soups. Most often for soup use fresh or dried mushrooms. 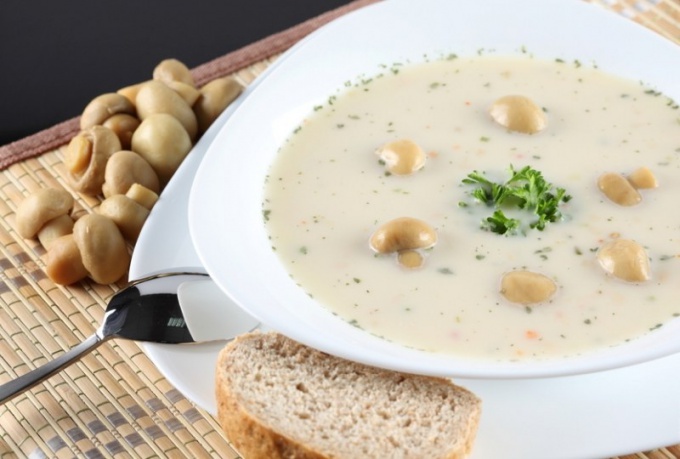 Related articles:
You will need
Instruction
1
Making a broth of fresh mushrooms is well suited white or button mushrooms. Mushrooms clean, rinse thoroughly in cool water and cut into small pieces. Then put them in a pot and cover with liquid rate of 200 grams of mushrooms, 1 liter of water. Put the saucepan on heat and bring to a boil. Boil the mushrooms for 30 minutes. Mushroom soup is ready. You can add vegetables (potatoes, carrots, onions), cereals (barley, rice) or used as a base for soup.
2
For the broth of dried mushrooms take 70-100 grams of mushrooms and pour 1 liter of cold purified water. Leave the mushrooms in the liquid for approximately 3-3.5 hours.
3
Then bring the swollen mushrooms on low heat to boil under the lid tightly closed. Cook them until until they become soft (25-30 minutes). During heating and cooking, try to avoid strong boil, which leads to the loss of specific mushroom flavor and aroma.
4
Ready broth drain and rinse mushrooms with cold boiled water. If the mushrooms are large enough, slice them into thin slices, fry together with the onion for several minutes in a pan. Strained mushroom broth, put on low heat and wait until boiling. To boiling liquid add the chopped small pieces of potatoes. Once the potatoes are soft, drop in broth, mushrooms with onions, add salt and bring to a boil.
5
You can soak dried mushrooms in milk or mix of milk with water. After the allotted time the remaining swelling liquid pour into a separate dish, and the mushrooms fill with fresh cool water. Cook them on slow heat for 20-25 minutes, adding the drained milk infusion for about five minutes before the end of cooking.
Useful advice
Mushroom broth is often made with concentrated and diluted to the desired state of hot boiled water.
Is the advice useful?
See also
Присоединяйтесь к нам
New advices