How to find maximum height

When throwing the body up it slows down with an acceleration g≈9.8 m/S2 due to gravitational attraction of the Earth. That is why at some point in time, planted the body stops and starts moving in the opposite direction, down. The distance from the point of changing the direction of movement of the body to the surface of the Earth and will be equal to the maximum lifting height. 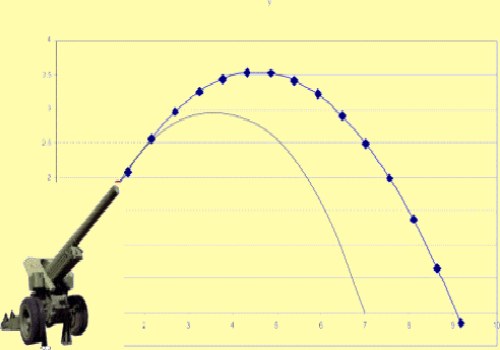 Related articles:
You will need
Instruction
1
Find the maximum height of a body thrown upward with a stopwatch. No matter if a body is thrown vertically upwards or at an angle to the horizon. Using the stopwatch, note the time that the body was in flight. Measure a time value in seconds. Since half the time spent in flight, the body rises in the second half is omitted, the resulting value divide by 2.
2
Calculate the maximum height of the body N. This construct is divided into 2 time of flight t squared. The resulting value multiply by the acceleration due to gravity g≈9.8 m/S2, and the result divide by the number 2, H=g∙t2/2. Get the height in meters.
3
Example. After a throw from the Ground, the body again fell on her after 4 s, what is the maximum height it went up? Locate the lifting body to its maximum height. It is equal to half of the total time of the movement 4/2=2. Substitute the value in the formula H=g∙t2/2=9,8∙22/2≈20 m. If you do not want improved accuracy, the value of the gravitational acceleration can be taken 10 m/S2.
4
Determine the maximum height of the body if you know its initial velocity. It can be measured with special radar. In some devices, it was originally known. In that case, if a body launched vertically upward with an initial velocity v0 to find the maximum height of the body divide the square of the initial speed to double the value of the gravitational acceleration, H=v02/2 * g. Speed should be measured in meters per second.
5
Find the maximum height of the body, the initial velocity v0 is directed at an angle to the horizon. When calculating, consider that the lift is only the vertical component of velocity, which is equal to v0y= v0∙sin(α), where α is the angle to the horizon that the body has begun its movement, its measure with a protractor. Then to calculate the maximum height of the body can use the formula described in the preceding paragraph, and the result is multiplied by the sine of α squared H=(v02/2∙g)∙sin2(α).
Is the advice useful?
See also
Присоединяйтесь к нам
New advices