Who won the award Muz-TV

Muz-TV is an annual landmark for the world of show-business event. Held on the first of June 2012 the ceremony brought awards to worthy representatives of the Russian music scene and beyond. 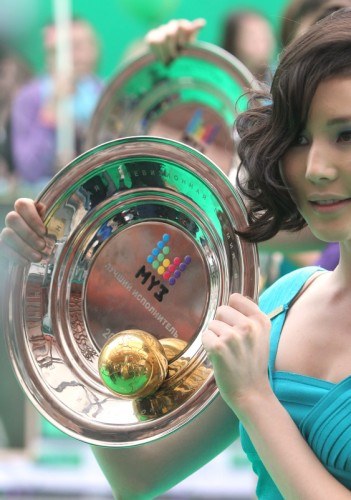 Muz-TV 2012 was the anniversary - this time it was held for the tenth time. In connection with a jubilee the organizers have prepared a special show with many surprises for the audience. Guests at the event were such well-known figures of show business, as Ani Lorak, Tree, Timur Rodriguez, Nyusha, Bi-2, Timati and many other Russian pop stars.

The awards were handed out at the Olympic stadium, and one of the main, "Best performer", was handed over to Dima Bilan. In this category he competed with artists such as Philip Kirkorov, Grigory Leps, Dan and his longtime rival Sergei Lazarev.

"The best singer" was the singer Tree that vote bypassed Vera Brezhneva, Ani Lorak, Nyusha, and even Zemfira.

Two major awards, which guests waited for the most, was eclipsed by thirteen other singers, singers and musical groups, which also won the silver plates.

In the nomination "Best song" winner was Jane with her song "Higher." Saucer for "Best album" went to "Degrees".

"Best pop band" on the tenth anniversary of the award Muz-TV was a group of "Vintage" plate for the "Best rock band" received "Beasts". In the category "Best rock band" for the seventh time the winner is call them, so sharp fight among the other candidates was observed.

Muz-TV covers many musical directions. After the pop and rock of the jury moved on to hip-hop, the winner in the nomination "Best hip-hop project was the group "band'eros".

The young actors have not yet obtained universal recognition, but which attracted attention to his person and work, competed for first place in the nomination "Breakthrough of the year". Got it Max Barskih.

Evaluated not only the songs, but their video feed. Nomination "Best music video" gave victory song "Snow" by Philip Kirkorov, the Director of which was made by Alan Badoev.

"The best duet" was the collaboration of the group "Disco Crash" and Christina Aguilera, which resulted in the creation of the song "weather Forecast".

"The best concert show" the audience of the channel Muz-TV called the concert of Philip Kirkorov called "ДруGоу" held at the State Kremlin Palace.

The main concert venue in 2012 was the Olympic stadium , which in the tenth time took to stage the award Muz-TV.

The organizers took care about the special prizes. So, "For contribution to the development of the music industry" the plate was awarded to Igor Krutoy. Handed her Emmanuel Vitorgan and Joseph Kobzon. This award was the first from the channel Muz-TV for Cool.

"For contribution in life" plate went to Mikhail Gorbachev. It got his granddaughter Ksenia from the hands of Vyacheslav Fetisov and Svetlana Zakharova.