How to cook steak with egg

Steak with egg is a delicious and hearty dish that is perfect for lunch, family dinner or even a hearty Breakfast. Prepare it from beef fillet or minced meat – each has its admirers. 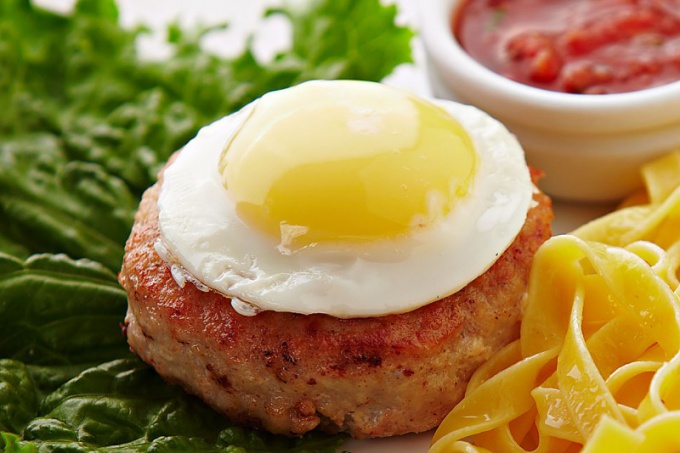 Related articles:
You will need
Instruction
1
Particularly popular is the chopped steak. Tender cutlets topped with mini eggs, very popular with the children, and adults will not remain indifferent to this dish. Cook the ground beef, turning the meat through a meat grinder or finely chop it with a cleaver. You can use ready-made stuffing, store-bought.
2
Finely chop two onions. Put onions in a bowl with mince, add egg, salt and ground black pepper. Stir the mince and knead it with your hands. Finely chop the parsley and dill, put it in the bowl with the tomatoes and again stir it until smooth.
3
Divide the stuffing into four equal parts and form round, slightly flattened beefsteaks. In skillet, heat butter and fry each cutlet on both sides until Golden brown. The finished steaks are put in a separate container and leave in a warm place.
4
Slice three onions in thin rings and place them in a pan with hot vegetable oil. Fry the onions until Golden brown, making sure it doesn't burn. Prepare fried eggs, releasing the eggs in a special round metal molds without a bottom. If such forms no, fry a normal egg. Cut it into four pieces so that each was in the yolk.
5
Put the steaks on the plate. On each, place a layer of fried onions on top put a piece of scrambled eggs. Sprinkle the dish with finely chopped green onions. On the side, serve a salad of fresh vegetables and roast potatoes.
6
If you don't like minced meat, cook the filet Mignon. Beef fillet cut into portions with a thickness of 2-3 cm. Cut the meat across the grain so that it remained juicy. Lightly beat off a wooden hammer steak, salt them and sprinkle with ground black pepper.
7
In a skillet, heat a mixture of oil and butter. Put the steaks and fry on both sides until browned. The pan with the steaks, place in the preheated oven and cook them until tender – it will take less than 5 minutes.
8
In a separate pan, fry the scrambled eggs. Finely chop the parsley and dill. Put the steaks on the plate, place them on a piece of fried with the yolk. Sprinkle the dish with chopped greens and freshly ground black pepper. Serve with fresh tomatoes, cut into large slices, and French fries.
Is the advice useful?
Присоединяйтесь к нам
New advices