How to check the head unit

Periodic reduction in the level of the antifreeze in the engine, evidence of the depressurization of the cooling system. The reasons for the manifestation of such faults, there are many. And some of them, the most problematic associated with the faulty head of the block of cylinders of the engine. 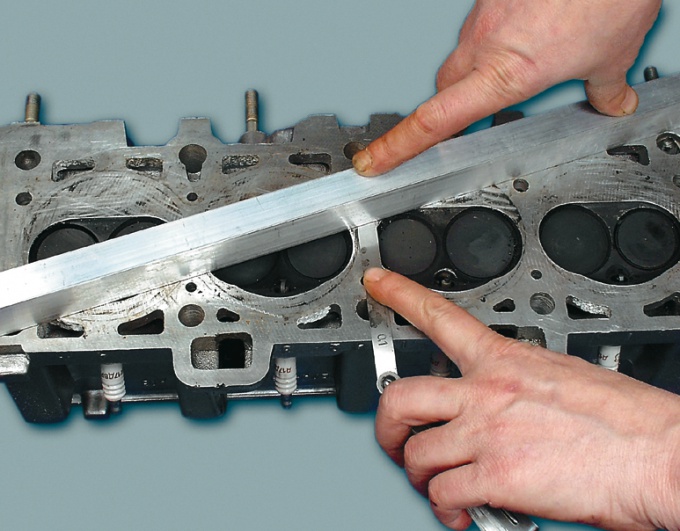 Related articles:
You will need
Instruction
1
One of the most unpleasant things for a motorist is considered to be such a thing as opening the surge tank cap, accompanied by intermittent ejection of the coolant, not to mention her incessant squeezing when she rages for a long time, although the engine temperature has not reached a critical level. This factor clearly indicates the penetration of the gases into the water jacket of the cooling system.
2
To thoroughly to find out the cause of the reported condition, the engine is dismantled head of the block of cylinders and placed on a workbench. After which she understands completely, up to the extraction from it of the valve timing.
3
Further, the plane of the head, intended for coupling with the motor through the gasket, cleaned of soot and other obstructions. At this stage we recommend you use a chemical cleaning method, mechanical – extremely undesirable.
4
The cleaned surface of the head is checked for bending the edge of metal ruler. Put a ruler on top of the length of the head, move her hands from one side to the other, while carefully nablyudaya the lower edge and the plane of the cylinder head. Any gaps discovered at this point, indicate that head sweep, usually due to overheating of the engine.
5
To detect cracks in the test engine parts, you will need to make from a piece of the conveyor belt the likeness of the head gasket block, with the only difference that it only cut the holes for combustion chamber.
6
Then made a gasket superimposed on the working surface of the cylinder head, put it on top of organic glass, cut to the shape of the head, and the whole "sandwich" is compressed clamps. And then tightly sealed the holes in the place designated for mounting the pump to the fitting for access to the heater is put on the hose connected to the air compressor.
7
Prepared in a similar way the head is placed in a bath of clean water. Then turn on the compressor and into the water jacket check the details of the blown compressed air in the range of 1.6 atmospheres. At this stage, the crimping cylinder head. Any appearance of air bubbles will indicate the location where a crack in the head.
Is the advice useful?
See also
Подписывайтесь на наш канал