How to replace thresholds at the WHA

The design of the sills of the car body consists of three elements: inner and outer linings, inside which is hidden the third element of the power box. And when it comes to repair thresholds, as a rule, involve replacement of exterior scuff plates. 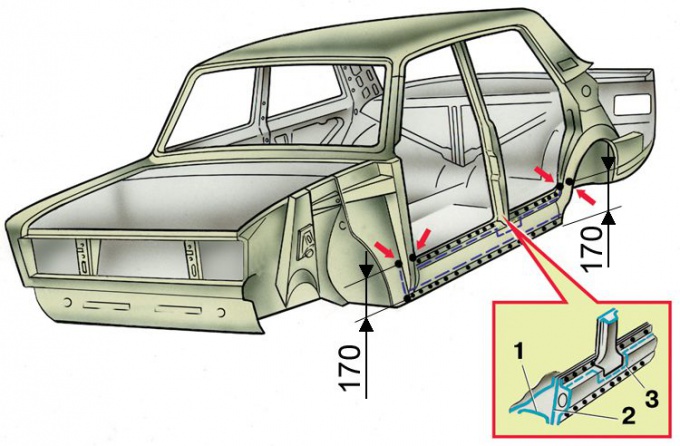 Related articles:
You will need
Instruction
1
For replacing the threshold, you first need to disassemble the front and rear wings. The wings are removed only on the side where restaurerede threshold.
Then drill, bore holes in places of spot welding, by means of which the outer plate is attached to the body. The recesses are made only in the outer plate, so as to produce a slice of the welded metal and loosen the plates, which later cut down body chisel.
2
After removing the sill top, the future site of a new element with the body trimmed a sander.
3
On the new pad, around the perimeter of the punch hole is done with a series of holes, the number of which is sufficient to secure the details. As a guideline for the number decide on the dismantled plate.
4
Prepared pad is applied to the threshold and exhibits, focusing on the pillar between the doors.
5
Clearly, fixing the plate clamps, start its welding to the body by filling the molten metal previously done in her holes with a hole punch.
6
To start welding, it is necessary according to the scheme: from the middle to the edges, alternately prevarila the top and bottom holes.
7
After positioning of the front and rear wings, the car is sent for painting.
Is the advice useful?
See also
Подписывайтесь на наш канал