How to change the oil seal on the engine

Leaking engine oil from under the oil sealthat is installed in the engine front cover, hits the alternator belt and sprayed around the engine compartment. Getting to the various places, the oil destroys the integrity of the rubber material of the belt, water pipes and other details. 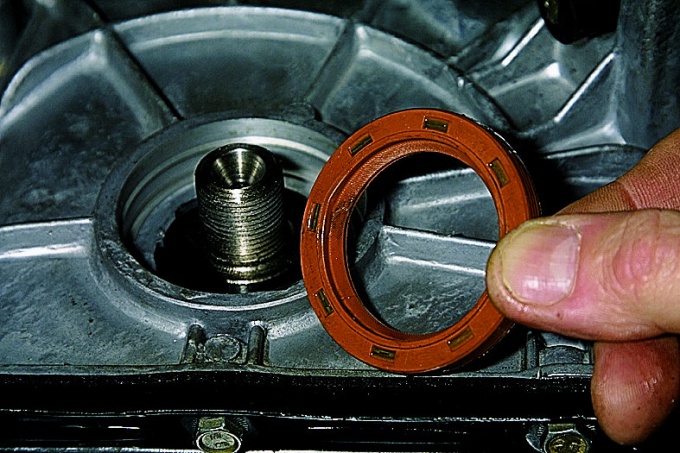 Related articles:
You will need
Instruction
1
In spite of the inaccessibility of the front oil seal of crankshaft, to change it without removing the engine. The procedure of replacement of the specified items is not considered difficult, but will demand from the owner a little time and additional disassembly of the front of the car to gain access to the crankshaft pulley, under which lies the gland.
2
In the preparatory phase of the engine antifreeze drained, and then remove the front facing grille and radiator of the cooling system.
3
Remove the drive belt of the generator and lock the engine from turning, tie up the flywheel.
4
After completing the entire list of preparatory work, turn off the key for ratchet bolt of the front pulley to the crankshaft of the engine.
5
After removal of the bolt, using universal puller removed the front pulley.
6
Then a screwdriver or other suitable tool from the front cover is removed the omentum, and in return set a new one.
7
Using the mandrel and hammer the new seal is precipitated by the depth of the groove in the front cover.
8
Install pulley and all further actions are performed in reverse order.
9
After collecting the car, and the Gulf anti-freeze, generate the control start engine to ensure no leaks of engine oil.
Note
Some masters recommend to remove from new seal before installing the spring to shorten it for a couple of turns, and once again put in place. Although the manufacturer does not recommend such action.
Is the advice useful?
See also
Подписывайтесь на наш канал