How to weave braids with thread

In different types of needlework often used braided pigtails – as decorative elements as well as buckles, fasteners, lace, and other necessary details for the jewellery and objects created manually. Beautiful and intricate braid of thread can be an independent decoration, if you do it carefully. In this article we will explain how to make braids of different types – from the simple to the more complex, using any materials: threads, cords, ribbons or braid. The length of the yarn for weaving must exceed the length of the proposed braids in 2.5 times. 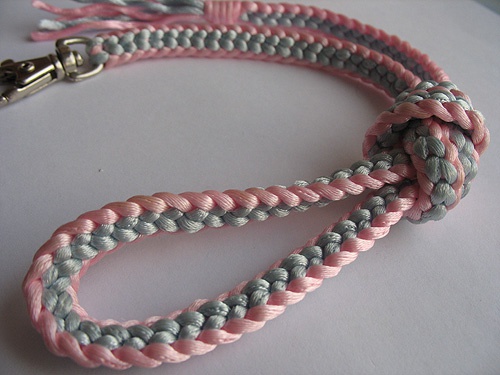 Related articles:
Instruction
1
Prefer to work, tying the ends of braids into a knot and attach them with a safety pin to a cushion or chair. If the pigtail is too many threads, seal them in a number of a clip.
2
To weave the simple braid of three strands, tie them into a bundle and attach to the base. The extreme left thread place on top of the middle strands. Then on top of average yarn place extreme right hand thread.
3
Keep the extreme twisting of the thread, placing them on top of each other on the middle strands, until braid is not over.
4
Fold in half the two strands of contrasting colors, tie the ends and attach to the base. Put the two strands of the same color in the center and two strands of another color on the sides to get four pigtail. Extreme monochrome filament cross – put the right over the left, placing them between the threads.
5
The second thread on the right place on the extreme right and crossed with the second left thread. Continue to braid using this technique to obtain a decorative two-tone pigtail of the four rows.
6
Pattern braids slightly change, if you will, as in the previous case, two contrasting strands, kinked in half, and spread them so that the two strands of the same color was on the left and two strands of another color on the right.
7
First left thread place on the second and third thread print between the threads of contrasting colors over the third thread. Fourth, place the thread behind the crossed threads and put on the first. If you don't get stuck in the process of weaving, in the end you'll have a pigtail with a snake.
8
More complex braids are obtained from five and seven threads. To weave pathiratne pigtail, take the thread one or two colors, alternating colors in the pigtail. The first left put the thread between the second and third from the top. Fifth, place the thread between the first and third from the top. Continue to braid, imposing extreme thread on the two adjacent strands and twisting a pigtail to the end.
9
Seven threads it turns a beautiful double braid. To accomplish the first left thread place on top of the second, and then pass under the third and fourth. The seventh (far right) the thread will place on top of the sixth and skip under the fifth and first. Extreme thread in this weaving is passed under the adjacent and superimposed on the next two.
Is the advice useful?
See also
Присоединяйтесь к нам
New advices