How to find the negative root of the equation

If the substitution number in the equation is true equality, such a number is called a root. The roots can be positive, negative or zero. Among the many roots of the equation distinguish a maximum and a minimum. 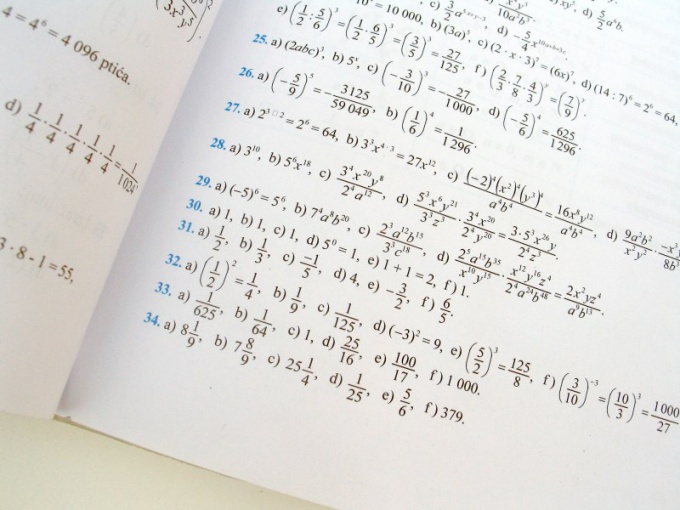 Related articles:
Instruction
1
Find all the roots of equations, among them select negative, if any. For example, the quadratic equation 2x2-3x+1=0. Apply the formula for finding roots of a quadratic equation: x(1,2)=[3±√(9-8)]/2=[3±√1]/2=[3±1]/2, then x1=2, x2=1. It is easy to see that the negative is not among them.
2
To find the roots of quadratic equations you can also use the theorem of vieta. According to this theorem x1+x1=-b, x1∙x2=c, where b and c are respectively the coefficients of the equation x2+bx+c=0. Using this theorem, you can calculate the discriminant b2-4ac, which in some cases can significantly simplify the task.
3
If in a square equation the coefficient of x is even, can be used not primary, and short formulas for finding roots. If the basic formula looks like x(1,2)=[-b±√(b2-4ac)]/2a, then in abbreviated form it is written as: x(1,2)=[-b/2±√(b2/4-ac)]/a. If in a square equation, no intercept, simply make x the brackets. And sometimes the left part of the folds to complete the square: x2+2x+1=(x+1)2.
4
Are the types of equations that do not give a single number, a whole lot of solutions. For example, the trigonometric equation. So, the answer to the equation 2sin2(2x)+5sin(2x)-3=0 is x=π/4+πk, where k is an integer. That is, if you substitute any integer values of the parameter k the argument x will satisfy the given equation.
5
In trigonometric problems, you may need to find all the negative roots, or the maximum of the negative. In solving such problems, apply logical reasoning or the method of mathematical induction. Several substitute integer values for k into the expression x=π/4+πk and see how it behaves argument. By the way, the largest negative root in the previous equation will be x=-3π/4 for k=1.
Is the advice useful?
See also
Подписывайтесь на наш канал