Where storks fly away

With the first cold weather flock of storks rise to a great height, and guided by instinct, moving along well-known routes, fly away to "winter quarters." Wintering birds in the South-East and West Africa. A flock flying over Europe, landing, and left to wait out the cold in France. Wintering birds there are in Ceylon, India and Burma. 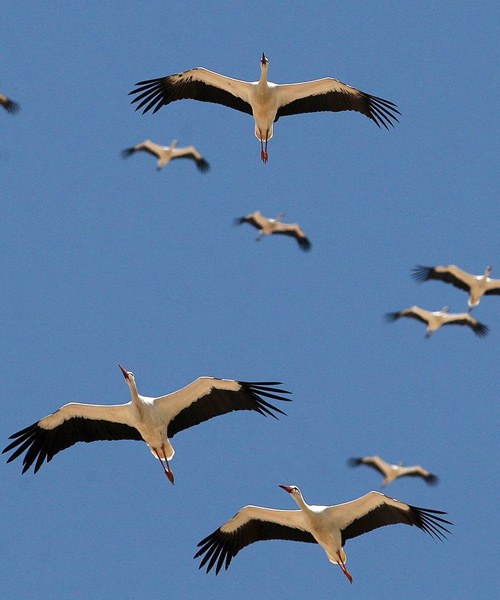 Related articles:
In mid-August, the storks gather in flocks and fly away to warm countries. Sometimes charges last until mid-October. Birds flying at a great height, landing and stopping for the night. If you allow the presence of ascending currents, bird flocks move in soaring flight. There are several directions in which moving birds, fleeing from the frost. One of the countries where winter storks in Africa. Get there bird different routes. One way on southwest, bypassing France. Some flocks spend the winter in the hospitable shores of the Seine and the Loire. Others are sent forth, in Eastern Spain, to Gibraltar. Here to join the Spanish flocks of storks and birds then follow along. Future path of birds is through the Morocco — West Africa. The number of travelers join birds nesting in Algeria. In West Africa, storks stop nesting in Senegal and Nigeria. In the South-East of Africa, just there are places that the birds have chosen to nest. Cruise travelers are moving above the Western shore of the Black sea, through the Balkans to the Bosphorus. Then the cross through Turkey into Syria. Flying across Asia, they gather flocks of their brethren from Asia Minor. Further, storks follow along the Eastern coast of the Mediterranean sea, crossing the space above the Jordan valley to the Sinai Peninsula. Here the travelers flying via North of the red sea to the Nile. Then the storks fly over Eastern Africa to the South of the continent. Not all reach the southern point, a flock land on the way and stay for the winter.In mid-November storks appear in Zambia. South Africa flocks reach in a month, in December.Flying storks in Burma. Here in Northern Myanmar, the birds have chosen wetlands for wintering. Tropics welcomes travellers, providing them with fertile meadows and clearings under the bottomless sky is bright blue by day and inky night.The way many of these long-billed representatives of the order Ciconiiformes, namely these include storks, lies Ceylon. Here arrives a great number of storks from Central Asia. They appear there in mid-August.Storks winter in India. Here in Western Madhya Pradesh, plenty of frogs, fish and worms, which are so fond of these birds. The Indian climate is favorable for breeding birds and hatching.Many flocks of wintering in Indochina and Korea. The proximity of the sea, fish and mild climate attracts birds to these places. Remain on wintering storks from the Far East.
Is the advice useful?
Подписывайтесь на наш канал