The magnitude of the angles lying at the vertices of the triangle, and the lengths of the sidesforming one of these vertices, connected by certain relations. These relations are expressed most often using trigonometric functions, mainly using sine and cosine. Knowledge of the lengths of all sides of the figure, it is sufficient to use these functions to restore the values of all three angles. 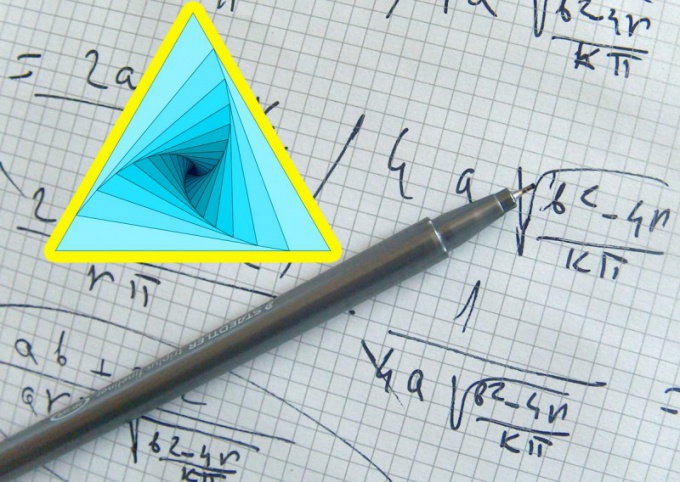 Related articles:
Instruction
1
To calculate the percentage of any of the angles of an arbitrary triangle use the theorem of cosines. It States that the square of the length of any of the partiess (e.g., A) equal to the sum of the squares of the lengths of the other two sides (B and C), from which is subtracted the product of their lengths, the cosine of the angle (α) lying in formed their top. This means that you can Express the cosine through the length of the sides: cos(α) = (B2+C2-A2)/(2*A*B). To get the value of this angle in degrees, to the expression, apply the inverse cosine function the inverse cosine: α = arccos((B2+C2-A2)/(2*A*B)). This way you calculate the value of one of the corners - in this case, which lies opposite the sidess of A.
2
To calculate the two remaining corners, you can use the same formula, changing it in some places lengths of the known sides. But a simpler expression with less number of mathematical operations can be obtained utilizing another postulate from the field of trigonometry the theorem of sines. She claims that the ratio of the lengths of any of the partiess to the sine of the opposite angle in her triangle are equal. This means that you can Express, for example, the sine of the angle β, which lies opposite partiess B across the length of the sidess C and the already calculated angle α. Multiply the length of B sine of α, and the result divide by the length of the C sin(β) = B*sin(α)/C. the Value of this angle in degrees, as in the previous step, calculate using inverse trigonometric functions - this time of the arcsine: β = arcsin(B*sin(α)/C).
3
The magnitude of the remaining angle (γ) can be calculated for any of the obtained in the previous steps, formulas, changing them places the length of the sides. But it's easier to use another theorem about the sum of the angles in the triangle. She argues that this sum is always 180°. Since two of the three angles you have already known, just subtract from 180° the value to get the value of the third: γ = 180°-α-β.
Is the advice useful?
See also
Подписывайтесь на наш канал