How to learn to weave carpets

Elaborate carpets of manual work was always appreciated. They give our home a special charm. A beautiful rug to decorate the bedroom and living room, and make it possible, giving free rein to their own imagination. It is necessary to master some skills. For a while, until there is the art of making carpets, the technology is virtually unchanged. 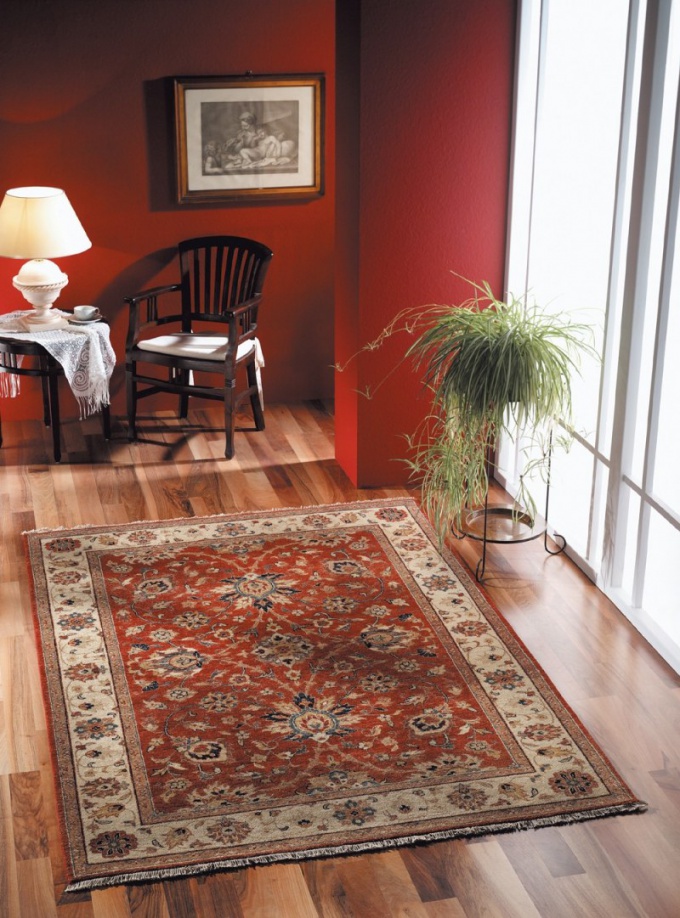 Related articles:
You will need
Instruction
1
Prepare materials for a small rug. Make frame. It is a rectangle, whose dimensions are a few more sizes of future products. Try to keep the angles were strictly straight. The bottom bracket is rigidly fixed to the sidewalls, the top is inserted in special grooves. Parallelism is governed by special wedges. The frame is usually attached to the frame.
2
Decide whether you want to make a carpet with pile or without. In any case, you need to determine the approximate density of weaving to divide the figure into the cell. The best option – 22 knot at every 10 cm for the carpet with a NAP. To begin, however, better with a smooth, obrazovannogo simple perepletena. When performing pattern I think not separate the warp threads and the pairs. On some machines the warp threads are put on cloves. But quite often they just wrapped the top and bottom strips of the frame. Both Reiki mark, to observe the parallelism.
3
The thread for the basics needs to be twisted and strong enough. It can be cotton, linen or synthetic. Carpet with a pile, choose a colorless base or one that fits in color to the wool yarn. For lint-free product is most suitable undyed cotton or linen.
4
Pull the thread. To the bottom bracket must be firmly attached. The top rail is a little lower. Tie the thread to the bottom rail at a distance of approximately 10 cm from the side, then slide it vertically, flip over the top rail and hangs vertically down. Start the thread from under the bottom bracket. Repeat procedure, ending to form the basis of approximately 10 cm to the second sidewall. If you've started to wind the base from below, and end the string needs at the bottom.
5
Between the sidewalls and the outermost warp threads to make the bead, pulling several of the threads. They need to make your rug did not turn.
6
Pick a color of yarn. Before you start to weave, check, they shed or not. Washable Mat, of course, have infrequently, but it is not excluded. The first time it is better to avoid subtle color transitions. Pick up the bright thread of primary colors. Better yarn to wind in a coil.
7
Make a drawing. If you can't draw, find a suitable image on the Internet. It is desirable that it was a picture with a large brim, with a small number of parts. The picture can be processed in Adobe Photoshop, making it black and white and removing the excess. Spread the color field. Them for clarity, color pencil or marker. Break the pattern cells. The process is basically the same as in the preparation of pattern for cross stitch or tapestry. Each cell included 1 pair of thread basics, thread cross weave (weft) are counted by the number of strips.
8
With wedges a bit raise the upper limit to the threads of the framework taut. Define even and odd threads. The distance between them is called the throat. Put between the even and odd threads long round rail, It needs to be somewhat greater than the width of the base. For large carpet rake is used with a diameter of about 2.5 cm. in the manufacture of products from thin threads its function often performs the cardboard strip.
9
Attach the right rail the same thread as the basics. It is needed in order to merge a couple of threads. If the carpet is wide, it is possible for convenience to reel it in a little ball. Print the thread forward, wrap the first couple threads the basics one turn, swipe to the next pair and also its wrap. Therefore pull the thread through. The end of the tie to the left side. On top do the same.
10
Mark the even numbered pairs. This can be done by using a short thread. This is necessary to avoid confusion in the process, because the weave is alternating first pair of threads turns in front of the weft thread in the next row it will be back.
11
Yarn for the weft wind in a small glomeruli. It is very convenient to use a fairly large shuttles for frivolite. The first row pad from left to right. Spend thread, as in ordinary weaving, first in front of a pair of warp, and then behind. Press the number of weft to the edge, i.e. to the thread that you wrapped loop. To the ranks of the laid down densely, very often use a special mallet with several metal teeth. Following a number of spin from right to left. Spend the weft thread over a pair of warp threads, if the previous row she was under it, and Vice versa.
12
Carpets without pile pattern around the perimeter is usually formed by alternating threads of different colors. But nothing prevents to make floral or geometric ornament and schematic. Do not forget to lock the thread. The basic pattern braid pattern.
Is the advice useful?
Присоединяйтесь к нам
New advices