How to make a catapult

Catapult is an ancient throwing weapon, the basis of the artillery of those times. It was possible to throw a stone in three ways: by stretching the fibers, twisting the tendons and the use of the counterweight. It is the latter method we use to make a small catapult, that is, use the energy of a falling counterweight. 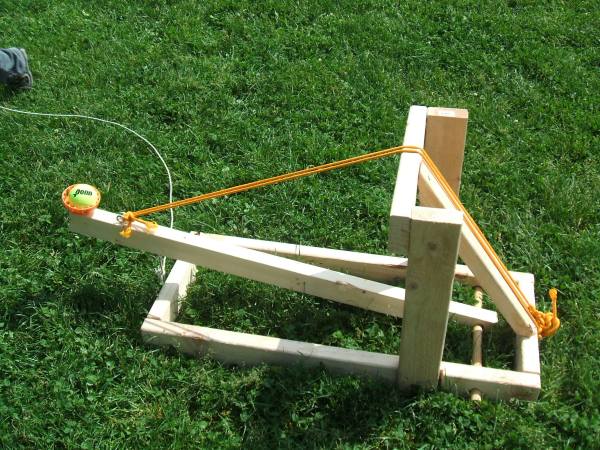 Related articles:
Instruction
1
To create the catapult you will need wooden slats with a cross section of 5 mm square shape, a little twine, a few nails or glue. And a couple of caps from glass bottles of beer or soda.
2
You need to create emphasis and twisting of twine to let the lever. Better to abandon the complex method of twisting the twine with the wedges and go to another way more simple: the rope needs to be tightened directly into the base for the catapult.
3
Attach the guides for releasing the lever, otherwise it will go away when the "battle course". Guide arm will move clearly and strictly in a straight line.
4
Reinforce the head part. This will prevent spillage of your fragile design in the small details after the first shot. Combat arm needs to hit a small wooden block, located at the head part of the catapult. This will save the device and improve the angle of the shot. Attach the lever to the wire hook. On the base of the mount trigger.
5
Now wrap the twine head piece of the catapult. It will also play the role of additional protection and will soften the blow of the lever. From bottle top to make a container for your "combat" charges. The catapult is ready! To shoot small stones she will be at a distance of approximately 2 m. That's all.
Useful advice
At the end mount on the head part emblem cap from the bottle labeled. To set the catapult on soft feet, made of balsa wood.
Is the advice useful?
See also
Подписывайтесь на наш канал