How to write Greek letters

Greek letters are widely used in various scientific disciplines. For example, in astronomy to designate the brightest stars in the constellations of mathematics and physics - in the form of constants. In addition, they are called coefficients, angles and planes, etc. And, of course, without them can not write the Greek phrase. Only in the Greek alphabet 24 letters. Each has its own name. 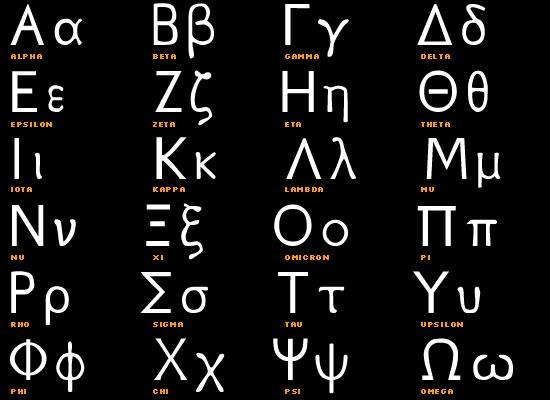 Related articles:
You will need
Instruction
1
Write the first four letters of the Greek alphabet. The title "alpha" looks like an ordinary And lowercase can be "a" or horizontal loops - α. A big "beta" written "In" a little familiar "V" or something, hang down below the line – β. Uppercase gamma looks like a Russian "G", but lowercase is like a vertical loop (γ). Delta is an equilateral triangle – Δ or Russian handwritten "D" in the beginning of a line and its continuation is more like "b" with a tail from the right side of the circle - δ.
2
Remember writing four letters – "Epsilon", "Zeta", "ETA" and "theta". The first title in printed and manuscript form are indistinguishable from the familiar "E" and a string is a mirror image of "z" - ε. A big "Zeta" is the well-known "Z". Another option of writing – ζ. Manuscripts may look like written in Latin f – vertical loop over the line and its mirror reflection below it. "This" is written "H" or like a lowercase n with a tail down – η. "Theta" has no counterpart in the Latin alphabet or the Cyrillic alphabet: an "O" with a dash of inside – Θ, θ. On the letter string mark has the form of a Latin v, from which the right tail is raised and curved first to the left, and then inside. There is another option of writing – similar to written Russian "in", but in mirror image.
3
Specify type the following four letters "iota", "Kappa", "lambda", "mu". Writing first is no different from Latin I, only lowercase is not put at the top of the point. "Kappa" like "To", but the letter inside words are similar to Russian "and". "Lambda"is the title written like a triangle without a base - Λ, and the lowercase has an extra tail at the top and playfully folded right leg – λ. Very similar can be said about Manchester United at the beginning of the string it looks like "M", and in the middle of a word – μ. It is still possible to write as a long vertical bar, which hang down below the line, which stuck to the "l".
4
Try to write "nu", "XI", "OMICRON" and "PI". "Nude" is displayed as Ν ν or the like. It is important that the string writing had a pronounced angle at the bottom of the letter. "Ksi" is three horizontal lines which is connected or no or have center vertical line Ξ. Lowercase letter is much sleeker, it is spelled "Zeta", but with tails at the top and bottom – ξ. "OMICRON" is only called strangers, and looks at any writing as "on". "PI" in the title option represents the "P" with a wider top rail than the Russian version. Written or lowercase the same as uppercase - π, or as a little "omega" (ω), but with a rollicking loop at the top.
5
Disassemble "Rho", "Sigma", "Tau" "Upsilon". "Ro" is printed "R" large and small, and the handwritten version looks like a vertical dash with a circle - Ρ and ρ. "Sigma" in uppercase variant is easiest to describe as a printed letter "M" that overthrew the left - Σ. Line has two ways of writing: a circle with a tail to the right (σ) s or disproportionate, the lower part of which hangs with the string – ς. "Tau"is the title I write as the printed "T" , and like a hook with a horizontal hat or Russian written "CH". "Upsilon" is the Latin "y" in uppercase form: or v on the stem – Y. Lowercase υ should be smooth, without any angle at the bottom is a sign of the vowel.
6
Please note the last four letters. "Phi" is written as "f" and an uppercase and lowercase variant. However, the latter may be "C", which has a loop and a tail below the line – φ. "Chi" is our "x" and little and large, only the letter lines going down from left to right has a smooth curve – χ. "Psi" resembles the letter "I", which has wings – Ψ, ψ. In the manuscript she is portrayed similarly to Russian. Different the capital letter "omega" printed and handwritten. In the first case is not closed loop with the legs – Ω. Hand write in the middle of the line, the circle, and under it is a line which can be connected by a vertical line, and you can not connect. A lowercase letter is written as double "u" - ω.
Is the advice useful?
See also
Подписывайтесь на наш канал