How to tie a shawl

Embellish any shawl is not only the figure, but the decorative elements, namely, tassels or fringe. There are many ways to decorate soft cozy product, making the shawl looks original, pleases its owner and attracts the attention of others. 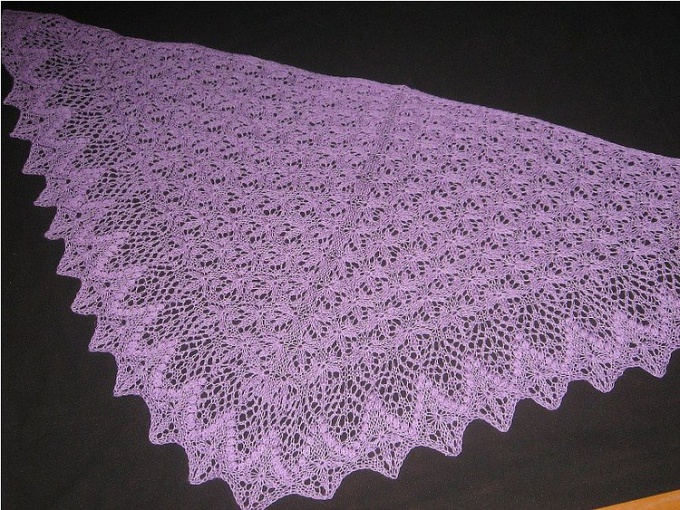 Related articles:
You will need
Instruction
1
In the treatment of the upper part of the shawl might be slightly different from the design side parts. It is also possible to ornament the edges of the shawl the way around the perimeter. It all depends on the basic pattern and fantasy mistresses. The number of rows each chooses their own, based on the texture of the yarn, pattern and total appearance.
2
Brush. Tie the shawl at the top edge of simple bar in the amount of 1-3 rows. Then proceed to the processing of the side pieces and tie them first with a simple column and then a column with nakida. Make presets for brushes. To do this, wind the yarn on the long side of any book with a dense crust, then cut it on both sides, which will get pieces of thread - the-blanks. Assemble them in bunches of 3-5 pieces (depending on preferred amount of the future of the hand) and fold each in half. Take a hook and insert it into the hole in the edge of the shawl (they will appear between the columns with nakida), grab a bunch of thread over the middle and in the formed loop and pass the ends of the brush. They can be done in 3-5 columns. After complete lateral parts completely, lay the product on a flat surface comb brush comb with a few teeth (massage) and gently trim edges with sharp scissors.
3
Pattern. No less beautiful to look at shawl patterns, which serve as both the continuation and part of the decor (instead of brushes or fringe). Tie the product around the perimeter of a simple rectangle, starting at the top. In order that the pattern is not lost at the edges of their sharp edges, at the beginning of each row first provarite 6 loops, 1 easy column in the same loop, originate from the air loop. Then continue with the design of the side parts according to the pattern of the scheme: *5 loops, 1 easy column using 3 loops of the previous row*. Provarite to 10 rows, given that each time a simple column vivaselecta in mid-air chain of the previous row.
4
The festoons. Tie the edges of the shawl around the perimeter of a simple column in the amount of 1-3 ranks, and on the side parts follow the scallops, which represent decorative elements in the form of an arc. Tie them according to the scheme: *6 loops, 1 easy column using 5 loops of the previous row*. In the next row, chain of air loops tie 10 columns with nakida, and then do a simple column (in a column of the first row). Make the resulting scallops cloves through 1 loop of the second row according to the scheme: *simple 1 column, 3 air loop, 1 simple column in the same loop*.
Is the advice useful?
See also
Присоединяйтесь к нам
New advices