How to determine valence electrons

Valence is the ability of an atom interact with other atoms, forming with them a chemical bond. In the creation of the theory of valence has made a great contribution by many scholars, primarily German and von stradonitz our compatriot Butlerov. The electronsthat participate in the formation of a chemical bond are called valence. 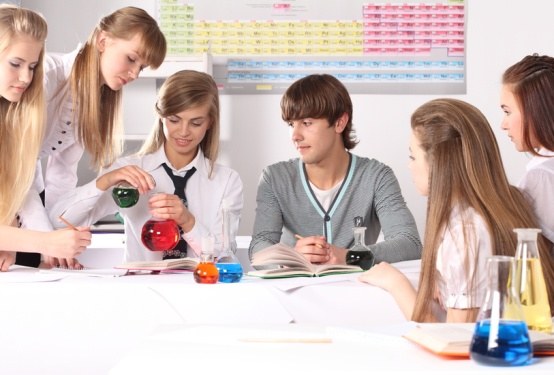 Related articles:
You will need
Instruction
1
Remember the structure of the atom. He is like our Solar system: in the center there is a massive core ("star"), and around it revolve electrons ("planet"). The size of the nucleus, although it focuses almost the entire mass of the atom is negligible compared to the distance to the electron orbit. Which electrons of an atom it will be easier to interact with electrons of other atoms? It is easy to understand that those who are furthest from the nucleus on the outer electron shell.
2
Look in the periodic Table. For example, the third Period. Go consistently for the main group elements. The alkali metal sodium has one outer shell electron, which participates in the formation of the chemical bond. Therefore, it is monovalent.
3
Alkaline earth metal magnesium has on the outer shell two electrons, it is bivalent. Amphoteric (i.e., exhibiting in their connections, both major and acidic properties) metal aluminium has three electrons and the same valence.
4
Silicon in its tetravalent compounds. Phosphorus can form different numbers of bonds and its higher valence five, such as in a molecule of phosphoric anhydride P2O5.
5
Similarly, sulfur can have different valence, the highest is six. Similarly behaves the chlorine in the molecule of hydrochloric acid HCl, for example, it is monovalent and the molecule of perchloric acid HClO4 –pneumococcal.
6
So remember the rule: the higher the valence of the elements in the main subgroups equal to the group number and is determined by the number of electrons in the outer level.
7
But what if the item is not in the main and side entry? In this case, are also of valence d-electrons of the previous sublevel. In the periodic table for each element is given a complete electronic composition. For example, what is the highest valence of chromium and of manganese? On the external level chromium have 1 electron in the d-sublevel 5. Therefore, the higher the valence is 6, as, for example, in the molecule of chromic anhydride CrO3. And manganese in the d-sublevel 5 electrons, but on the external level -2. Hence, it is of the highest valence – 7.
8
You can see that chrome is in the 6th group to manganese in the 7th. Therefore, the above rule also applies to elements of side subgroups. Remember delisting of Cobalt, Nickel, Palladium, Platinum, Rhodium. Iridium.
Is the advice useful?
See also
Подписывайтесь на наш канал