How to trim azaleas

Azalea – flowering plant of the genus rhododendron. The intensity of growth and flowering of azaleas, as well as the height of the Bush plants are determined by conditions of their cultivation. Azaleas require moderate watering and bright sunlight. 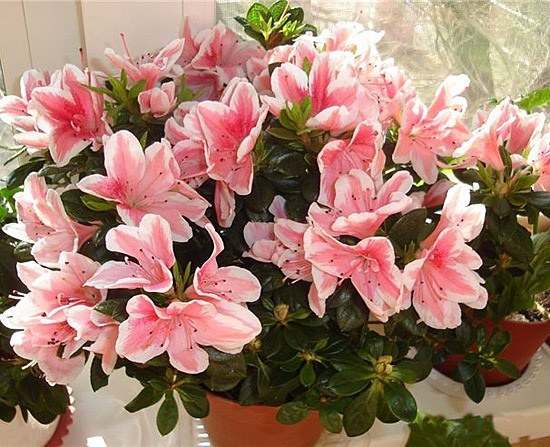 Related articles:
Instruction
1
In summer, the azaleas should be sprayed with water and watered more liberally. The flower buds are formed at the ends of annual shoots, when they are healthy, short, thick and have dark green leaves. These shoots grow only in bright light plants and low winter temperature of 12 16оС.
2
The crown of these flowers are cut in different ways. It all depends on the varieties of azaleas. Some varieties grow better after a good pruning of the crowns after flowering, and the other should be cut carefully and slightly.
3
During flowering azaleas pluck shoots that have appeared near the buds. When the flower starts to wither, it should be nip. During this period, prune the crown of the plant to form its beautiful shape.
4
If your plant is not prone to the formation of long branches, the shape of his crown, only primitiva growing shoots. So you remove only the top of the escape. Weak shoots better to remove completely by cutting them at the base.
5
So Azalea had a beautiful shape of the crown during flowering, constantly watch its growth and do pruning. Notice how the plant recovers after this and lays the buds. If your Azalea tall, trim it more if it has short shoots, only crawl pinched.
6
Sometimes azaleas bloom well without much pruning. This usually happens when you complied with the conditions of wintering of plants and a pre-flowering low temperature, good lighting, adequate humidity, moderate watering and good plant growth in the summer.
7
Azaleas usually have to place the flowers after drying them Wake up vegetative buds. Of these two or three buds develop new shoots. If all sprout from the buds, then one of the shoots may significantly lag behind in growth. Such a weak sprout, you can remove or pinched his tip at the beginning of the growth.
8
Dwarf types of azaleas can not be subjected to pruning and topping, if you do not see any shoots-Champions who'll be ahead in its growth and disrupt the shape of the crown of the plant. Time presidnete such "upstarts" top pochacco, and they will cease to outperform its counterparts. Your Azalea will once again be perfect.
Is the advice useful?
See also
Подписывайтесь на наш канал