How to make a toy dragon bead

Products of bead are distinguished by elegance. This material weave is not only jewelry, but also bouquets of flowers, and even insects. It is even possible to make a toydragon out of beads, just have patience. 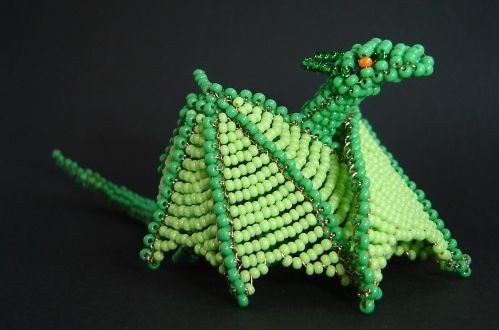 Related articles:
You will need
Instruction
1
Start to weave the dragon of the bead from the head. On a thin wire type with an odd number of beads, place them in the middle. Guide the wire through half of the beads so that the ends were on either side of the nose of the dragon.
2
Next, braid the head of the toy, while performing upper and lower parts. Wire every time you get in the middle of the product. Gradually increase the number of beads, forming the head of the dragon.
3
At a distance of 4-5 rows from the beginning of weaving wire string on 2 beads of a contrasting color to make eyes. After several run ears of three additional beads on both sides of the head.
4
Continue to braid the neck with the same number of beads in each row. During the transition to the body of the toydragon from the beads gradually add the number of beads.
5
In the process of weaving tightly fill the product with synthetic padding. This will make a toydragon from beaded hard and she will not lose shape.
6
Weave the dragon's back and stomach, which can be performed by beads of a different color. The tail gradually reduce the number of beads. The tip of the tail, weave the first two beads in the row, finish with several rows of the same beads.
7
Separately weave front and back paws, starting with the claws. Limbs do not have to do volume. Wire attach the legs to the body by threading it through the beads.
8
Weave the wings of a dragon. To do this, from the beads of the main color, do the backbone. Weave four long "bone", United at the base, consisting of a single bead in the row. From them proplatit two short bases of the two beads in a row, connect them together with zigzag.
9
Weave the membranes of the wings beaded lighter shade. Will fill the places of the bends of the wings. Wire, attach the finished wings to the body of the toydragon.
Is the advice useful?
Подписывайтесь на наш канал