How to make a dragon head

The dragon is one of the Central figures in Chinese mythology. At the Chinese theatre, the point guard on the scene of various episodes of popular myths, there is an unusual image of a dragon, which is sometimes assembled from parts of different animals. Like most of the theatrical masks, the mask of the dragon is very bright, graphically. It is characterized by the use of contrasting colors – red, yellow, black, white. Large dragons with long colorful tails that are managed by multiple people, are an integral part of folk festivals in China and popular in many countries. 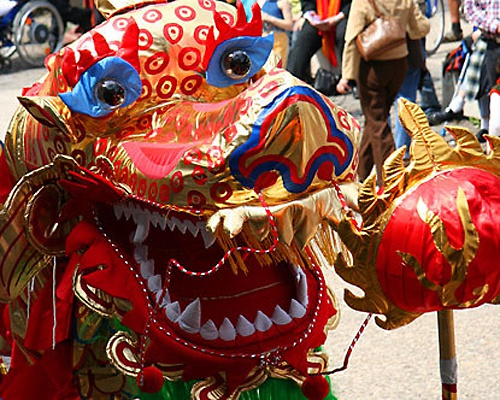 Related articles:
You will need
Instruction
1
Make a wire frame of a large ball. Having determined the size of the head of the dragon, wrap the wire around an imaginary sphere, leaving open the lower part of the frame to inside the head of a dragon could fit head and shoulders of a person. Thus wind more wire on the surface of the globe was not large holes.
2
On one side of the resulting ball, make holes for eyes of the dragon, extending the wire. Squeezing the ball with your hands, give it the shape of the head of the dragon: splyusnuta it on the sides, make a more convex region of the nose, eyebrows, pull forward the upper jaw (resembling a duck bill). For a greater volume of parts available frame to build another wire.
3
When the shape of the frame satisfy you, glue it with pieces of torn Newspapers or strips of thin cotton cloth, thoroughly soaked them in white glue diluted in half with water. The first layer of papier-mache dry for about eight hours.
4
Glue the head of the dragon second layer of paper or fabric. Allow the product to dry. Two layers of papier-mâché enough for the head of the dragon was strong.
5
From cardboard cut two semicircular ear of the dragon. Glue them on the head using glue gun.
6
Paint the head bright colors paints (gouache, acrylic). The head can be decorated with any intricate patterns. Using contrasting colors highlight the individual traits of the muzzle of the dragon – eye sockets, nose, cheekbones. Also some part of the head you can glue the shiny adhesive tape.
7
Of bright plastic plates cut to the eyebrows of the dragon and glue them above the eyes with glue gun. Stick also thin feather boa (white or color) along the upper jaw and the zygomatic arches of the dragon.
8
Eye socket seal inside a thin black cloth or fine mesh through which to see well. To make the eyes, glue the black fabric circles from thin felt or cardboard. Draw the pupils. Chinese dragon may have long eyelashes which can make the improvised – paper, thin plastic, colored wire.
9
If you want to make a movable lower jaw to your dragon, then take a wire of suitable size semi-circular frame and obtyanite it with cloth, glue or papier-mache. Attach lower jaw to head using wire.
10
Paint the lower jaw with red paint, glue along the edge of the boa. Draw or glue the dragon's large teeth. Enhance the image of the dragon final touches – sometimes spray paint metallic colors, sequins.
Is the advice useful?
Присоединяйтесь к нам
New advices