How to learn to play the flute

The flute is the collective name of related wind instruments similar to the recorder. Pipes come in different lengths, they can be differently located holes. However, the technique of these tools in different Nations are the same. The principle is based on the oscillation of the air column, the length of which varies depending on the position of the fingers. 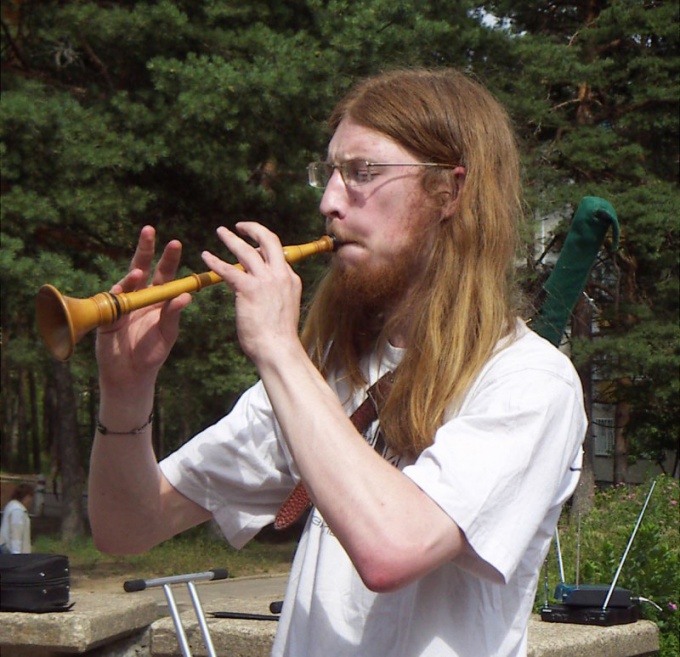 Related articles:
You will need
Instruction
1
Let's see how many holes your pipes and where they are located. Depends on the position of the fingers when playing. If there is a hole located on the bottom side of the tool, it is necessary to clamp the thumb of the left hand. In the absence of such holes the toe back just a pipe from the bottom. In any case, the left hand is closer to the lips. The index finger of the left hand grasps the proximal to the lip opening, middle, next, etc. little finger in the process not involved. If holes greater than four, then the fifth covers the index finger of the right hand. Some of the pipe a number of holes on the side. But in any case, the left hand is closer to the lip that is above right.
2
Learn how to take a breath and exhale the air. Take short deep breath, as if singing. Exhaled air slowly and smoothly. Before you try to extract the first sound, train yourself to breathe without tool. Blow into the mouthpiece of the instrument, without clamping bores. Do not despair, if you just get a wheeze and a whistle. This means that you have not found the correct position the pipes toward the lips. Change it until you hear a clean twang.
3
When you learn how to take the initial sound, try to take turns to close your fingers in different holes. Every time you achieve a smooth continuous sound. It should not be broken, go to a wheeze and a whistle. If you need to take a shorter sound, do not stop breathing, and close the hole of the mouthpiece with your tongue. If you quickly open and close a language is the hole - get a tremolo. This method can also be useful.
4
In order to learn to pick up tunes, you need to know the structure of the scheme. If there is a piano and synthesizer, press turns the white and black keys of the first octave (it is in the middle, with the piano usually the castle is located opposite the re of the first octave). The interval between adjacent keys, regardless of whether, they are white or black, is exactly half a tone. Try to find the same interval for the pipe. Can as a reference to use the determinant of fingerings for soprano recorder. Even if the location of the holes on your pipe otherwise, you will be able to understand the principle on which is played a tone or semitone.
5
Very useful to understand the structure of the major and minor scales. It's best to do on the example of the scales of C major, since it is played on all white keys. Between do and re the distance of 1 tone, and between re and mi. Between mi and FA no black keys, so they're only a semitone. In a group where three black keys this sequence: tone, tone, tone, semitone. Under this scheme, to construct all major scales. Learn to distinguish the tone and semitone by ear and try to play the tones in the sequence of intervals. Determine what is natural minor, and do the same thing. Most convenient for the analysis of the tonality of a minor.
Useful advice
If you know musical notation, try to determine which sounds give your pipe. This can be important if you are going to play in the group. Identify the basic sounds of a tuning fork or piano keyboard.
Is the advice useful?
See also
Присоединяйтесь к нам
New advices