How to boil raw shrimp

Shrimp are perfect for salads, first and second courses, and they can be submitted as a separate meal. Properly cooked, they have a tender meat and delicious taste. 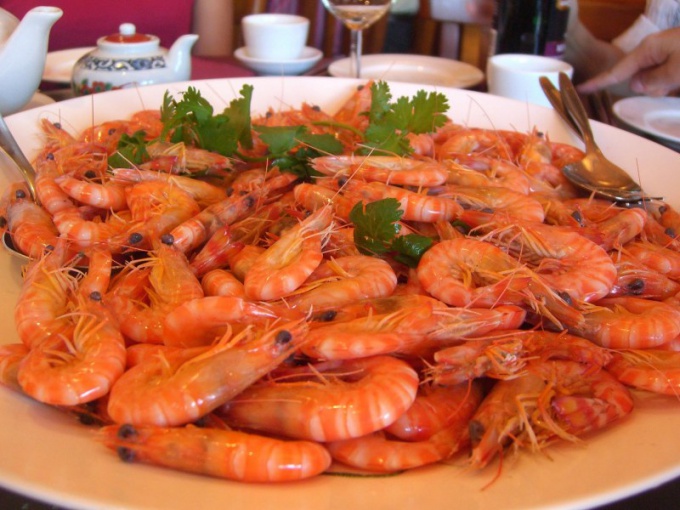 Related articles:
You will need
Instruction
1
Select shrimp. They are sold in two forms: cookedfrozen and raw frozen. The second differ in that they have gray-green hue. Head is greenish or brown. Both options are the norm. Often sell raw king or tiger, which have a relatively large size.
2
Pour clean water into the pot. Water should be about two times the amount of shrimp. Put the saucepan on a high heat and wait until the water boils.
3
Add to boiling water a half of lemon, cut into large slices, one Bay leaf, two cloves and a few peppercorns. The sunflower water. Optionally, you can increase or decrease the amount and variety of spices. Pretty good shrimp absorb the flavors, so rely on your taste. In addition to dry spices, you can add fresh dill or parsley.
4
Dip the shrimp in the prepared broth. Reduce heat to minimum, cover the pan, leaving a small hole for steam output. In the process of cooking the shrimp, you need to mix, but do it gently as they are quite fragile and can lose its integrity.
5
Remove the pan from the fire six or seven minutes (if you have bought cooked frozen shrimp, then boil them do not need - just put in boiling water for two minutes). Ready the prawns will be evenly pink and float to the surface. Drain them in a colander, wait until the draining liquid. Place shrimp on a dish, sprinkle with juice from remaining lemon halves. Shrimp is ready you can decorate with greenery.
Note
If the package of shrimp you've discovered a lot of ice and snow, this indicates that the temperature mode of storage has been violated. The purchase of such goods should be abandoned to preserve their health.
Useful advice
Properly cooked shrimp will be tender, tasty meat. If you overcook it, it will become tough and "rubber".
Is the advice useful?
See also
Присоединяйтесь к нам
New advices