How to draw axonometric

How to portray three-dimensional body on the plane of the paper? For this purpose, methods of perspective (from the Greek words "axis" — axon and "measure" — metreo) or projection. The easiest way to show this principle in the case of Cuba. 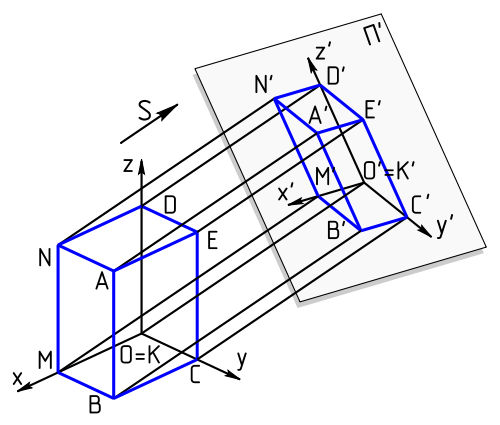 Related articles:
You will need
Instruction
1
The axonometric view can be made in a rectangular projection, and oblique. First, build the cube in a rectangular isometric projection, i.e. the projection occurs perpendicular to the plane of projection and the scale on each axis the same. Usually, for simplicity, the distortion factor is accepted equal 1.

Draw three axes. To do this with a ruler and pencil draw a vertical line from about the middle of the sheet up. Using the protractor from this line put angle of 120 degrees to both sides and make the appropriate line. Turned axis in space. Now on these axes put the same segments. From the points draw lines parallel to a coordinate axis. For this purpose again it is necessary from each point to postpone for 120 degrees in both directions. And on each beam with a ruler put a cut of the same magnitude as before. Now, connect the resulting points in parallel lines. Get the rectangular cube in isometric projection. It still bears the name orthogonal.
2
To get a rectangular diametrical projection, and save the sizes in any two axes, and the remaining is distorted in a desired or arbitrary degree. In fact, the cube turns into a parallelepiped.
In addition there are rectangular oblique projection, in which projection occurs at any angle to the plane in addition to direct. Distinguish frontal isometric projection, front demetrescu and horizontal isometric projection.
3
In order to build a front oblique projection, put the following angles between the axes: horizontal and vertical — 90 degrees, and the third axis tilt relative to the vertical to 135 degrees. In addition, allowed other deviations 120 or 150 degrees. After that, build a projection similar to the previous case, but only in the frontal projection will maintain the aspect ratio. For horizontal projection, the proportion will keep in the horizontal plane.
Note
During isometric projections is difficult to assess the depth and height of the graphic.
Useful advice
Axonometric view is most often used in an engineering drawing and CAD and in computer games for creating three-dimensional objects and panoramas.
Is the advice useful?
See also
Подписывайтесь на наш канал