Voltage 220V used in home power, is dangerous to life. Why not begin to organize in the homes of the 12-volt network and produce the corresponding electrical appliances? It turns out that such a decision would be very inefficient. 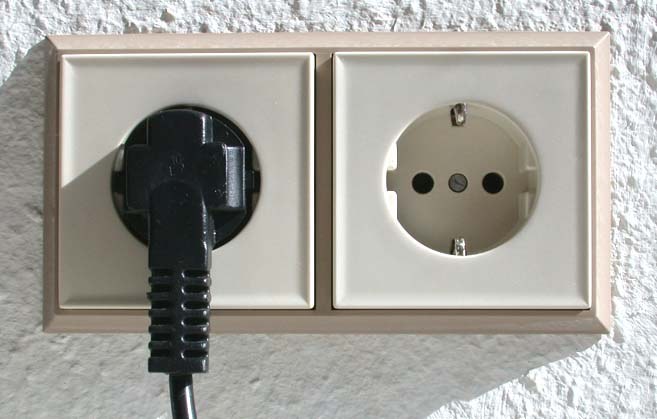 The power allocated to the load equal to the product of voltage on it and passing through it current. It follows that the same power can be obtained using an infinite number of combinations of currents and voltages - the main thing to work every time was the same. For example, the power output of 100 W can be obtained by 1 V and 100 A or 50 V and 2 A, or 200 V and 0.5 A, and so on. The main thing - to make a load with so much resistance that when the desired voltage is passed through it the required current (according to Ohm's law).

But the power stands out not only on load but also on the lead wires. This is detrimental because this power is lost useless. Now imagine that for the power load capacity of 100 watts uses conductors with a total resistance of 1 Ohm. If the load is supplied with voltage of 10 V, to obtain such capacity through it will have to pass a current of 10 A. that is, the load must have a resistance of 1 Ohm, comparable to the resistance of conductors. So, they will have lost exactly half of the supply voltage, and therefore power. So in this scheme, the power load developed at 100 watts, you will have to raise the voltage from 10 to 20, and in heating the conductors will be of no use to save even 10 V * 10 A = 100 watts.

It would seem that when 12 volt power is also possible to reduce losses by using thicker conductors have less resistance. But they will be very expensive. Therefore, low-voltage power is used only where the conductors are very short, and so they can afford to make thick. For example, in computers such conductors located between the power supply and the motherboard, in vehicles - between the battery and the electrical system.

What if, on the contrary, to apply in home electrical lot of tension? Because then the conductors can be made very thin. It turns out that this solution is also unsuitable for practical use. High voltage can penetrate the insulation. In this case it would be dangerous to touch not only exposed wires but also isolated. Why do only the high-voltage transmission lines, which saves a huge amount of metal. Before serving in the house this voltage is lowered to 220 V via transformers.

A voltage of 240 V, as a compromise (one side, not piercing the insulation, and on the other, allowing to use for household wiring is relatively thin wires), proposed the use of Nikola Tesla. But in the US, where he lived and worked, this proposal was not heeded. There are still applied voltage 110V - too dangerous, but to a lesser degree. In Western Europe the voltage is 240 V, that is, as much as Tesla suggested. In the USSR there are primarily two voltage: 220V in rural areas and 127 in the cities, it was then decided to transfer to the first of these stresses and the city. It is now widely used in Russia and the CIS. The most low is the Japanese grid. The voltage it is only 100 V.