The Bridge Of Alexander III

Every meter of the city of Paris is literally filled with attractions. The amazing story of the French capital have left behind many traces. Tourists love its antiquities, for the beauty, scale and originality. 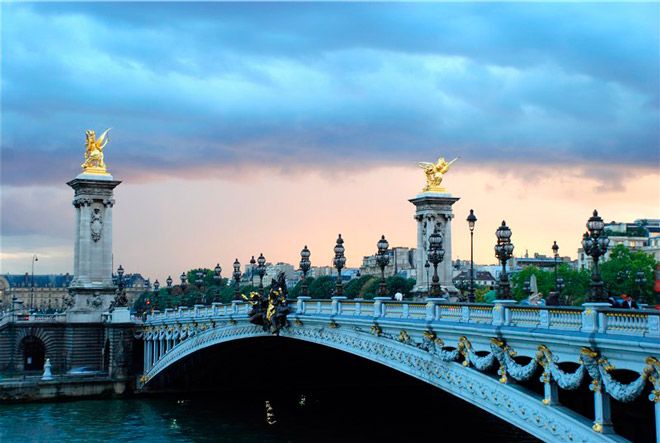 One of the most famous bridges of the city is located between the Champs Elysees and Les Invalides. The Assembly is designed so as not to close an amazing view of the Champs-elysées. Therefore, the height of this arch of creation is not more than 6 m. It was founded in 1896, the Structure created by none other than Tsar Nicholas II. Construction is timed to the beginning of the Alliance of France and Russia. The building was named in honor of Alexander III (father of Nicholas II). The Grand opening was held in 1900, it then began operation of the world Expo.

This bridge has a length of one hundred and sixty meters, and is fully decorated with exquisite statues of angels, Pegasus and the nymphs. Most directories and guides is rightly called the most beautiful building in the whole of the French capital. On both sides of the entrance are two large lamp posts. Their height is seventeen meters, and the tops are bronze figures. Two of them symbolize the Art and Science, and on the opposite Bank Battle and Industry.

In the middle of the structure there are also two icons are statues of the nymphs. One is the nymph of the Neva, which holds the coat of arms of the Russian Empire. Opposite is the nymph of the Seine river with the French arms. Saint Petersburg has a bridge-sister to this attraction. Today it is called Kirov bridge, but during the opening it was Trinity. They were built at the same time to focus on the closeness of the two States.