The issue of accelerating the ripening of tomatoes is of concern to many gardeners. Especially nice to gather with branches already red flavorful fruit. To achieve this, we need, first and foremost, learn to properly shape plants. 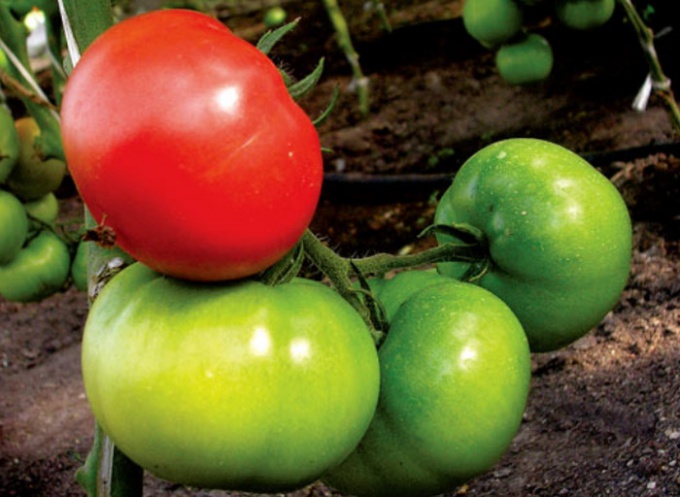 The formation of tomatoes includes, mainly, remove side shoots and pinching.

Remove side shoots of tomatoes

Since tomatoes are much branched, forming in each kidney, located in the leaf axils, lateral escape, it is advisable to remove, that is, conduct side-shoot removing. If this procedure is not done, then soon all side shoots will appear floral brushes. This will slow down the growth and development of the whole plant and, accordingly, the ripening of fruits. Side-shoot removing triggers not only accelerated the ripening of tomatoes, but also increases the first harvest. Pasynkovat tomatoes is recommended, primarily in areas with short summers, as well as in the cultivation of late varieties of tomatoes, with dense plantation and if the plants are going to increase at the expense of fruit set. When you remove side shoots of the plant can be formed in one, two or three stalks. In the first case on the main stem, remove all side shoots that have formed in the axil of each leaf, second - leave stepson, which was formed under the first flower with a brush. In the third case, leave the same stepson, and another one who is lower, but well developed. New shoots appear regularly on the tomato plants, so they need time to remove. It is advisable to do it with scissors, leaving a stump of about 1 cm.

Pinched tomatoes is carried out if there is a need to limit the growth of shoots. With removed the top part of the fruiting escape. This procedure allows to accelerate the formation and maturation of the ensuing fruit. Depending on different factors such as plant variety, weather conditions or location of the district, the nipping is carried out over the 2nd, 3rd or 4th tassels. This procedure is especially important for late tall varieties. Simultaneously, remove all floral brushes that will not have time to form fruit.

Will help accelerate the ripening of tomatoes and this technique, like turning the fruit to the sun. At the same time on the plant and remove all yellowed and dead leaves, and under sprouts with tomatoes put a wooden support. Thus, the sun will get to the tomatoes, which will cause the speedy ripening.

If the Bush is well formed, but still unripe fruits, you can remove them in this state. This will help to speed up filling the rest of the fruit.