With the arrival of spring you can treat yourself to a variety of delicious salads, appetizers, first and second dishes made with sorrel. It is amazing medicinal plant is rich in vitamins and minerals. So after a winter of beriberi, it is recommended to vary them in your diet. Especially appetizing in appearance and delicious sorrel soup. In addition, they are quick to prepare. 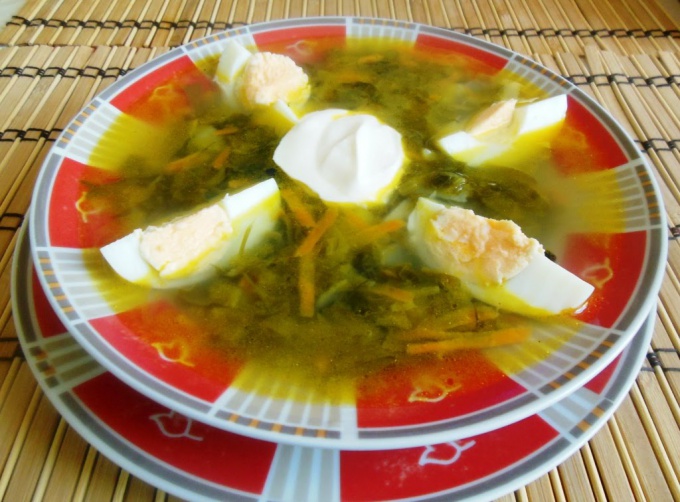 Peeled onions and carrots cut into half rings. Sauté them in sunflower oil for two to three minutes. In the broth in his absence, be replaced with water) put the diced potatoes in the amount of four pieces. Cut into noodles two bunches of sorrel, and throw in a bowl to svalivsheesya potatoes, followed by add to the pot of roasted vegetables. Salt, pepper, season with spices to taste . Boil for another one or two minutes, but no more. Quick sorrel soup served with sour cream and a piece of egg.

Soup-puree of sorrel with shrimp

In a bowl pour one hundred and fifty milliliters of hot water, to release about three hundred grams of sorrel, cook for seven minutes. Cool, then RUB through a sieve, add salt.

A lot of greens put into the blender, whip until smooth, while beating slightly diluted with boiling water.

When serving in a bowl pour the sorrel puree in the center of mass of greenery, on the edge – krevetki and pieces eggs, cut lengthwise. Cream soup of sorrel shrimp can be decorated with mint leaves.