Dieffenbachia is a spectacular plant that is very appreciated by interior designers. Rather, it is a group of plants of the family Araceae, now there are more than fifty species of dieffenbachia. These natives of the South American tropics thrive in large spaces. They grow very fast. The main decorative element of leaves, but the flowers also look pretty elegant. 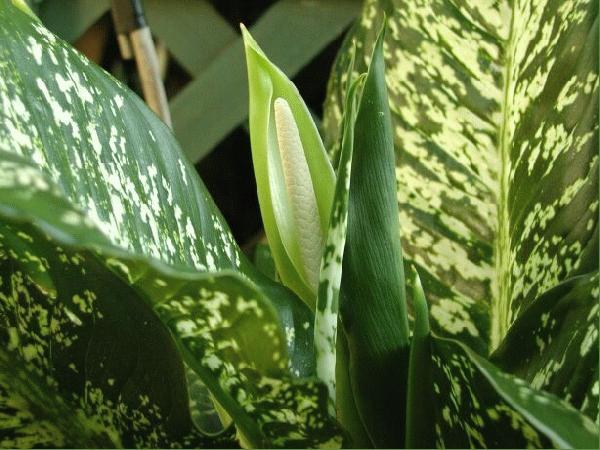 How to grow dieffenbachia

Almost all species of dieffenbachia – straight thick fleshy stems. Most often this plant has a single growth point at the tip of the shoot. But some species are well branched. All dieffenbachia grow very fast. Over time, the bottom of the stem stiffens and becomes bare, so the old plant is gradually losing its beauty. But it does not matter, because dieffenbachia unpretentious and quite easy to tolerate a transplant.

European growers cultivate such species of plants as dieffenbachia Leopold, a Charming, Oersted, Bouse, Sika and others. Now among the many species and varieties of this plant is a dwarf form, so that the flower can decorate not only a spacious office and a small apartment. In most species the stems and the leaves are oval, leathery, with white spots, although there are plants rich green color, without any gaps. In the indoor horticulture are now known not only different species of plants, but also quite numerous hybrids. They bloom about the same.

What is the flower

Like all Araceae plants, dieffenbachia inflorescence is a spathe, resembling corn. Flowering usually begins in the spring, in late April or early may. The appearance of a flower – an amazing sight. The cob comes out of the bosom of the sheet. It has a veil, often cream-colored, sometimes greenish. Unfortunately, dieffenbachia at home it blooms very rarely and not for long.

Flowering lasts a few days. Then the ear fade, but he does not fall off. It is best to cut it off because it robs the plants of nutrients. If dried on the cob not to remove, plant growth may slow down. Sometimes the lower leaves begin to dry and fall off more rapidly than netsvetuschie plants. However, dieffenbachia, some insects pollinate our latitude, and if that happens, the site of the flower will appear bright red or orange berries, very decorative, but poisonous.

Dieffenbachia, of course, very beautiful, but to put it not in all areas. For example, it is not recommended to decorate with these plants, the kitchen or the nursery. Do not keep dieffenbachia institutions. The fact that all parts of any species of this family are poisonous, especially toxic juice, which is even just in contact with the skin causes burning and irritation. Juice of dieffenbachia white. If it enters the mouth, the tongue swells and the person loses the ability to speak. South American Indians from this plant to prepare drugs for baiting rats.
Is the advice useful?
See also
Присоединяйтесь к нам
New advices