How to learn to write quickly on the touch screens

Smartphones, tablets and other digital portable devices have become increasingly embedded in the everyday reality of modern man, displacing the ordinary and familiar objects of the real world. And with a keyboard for typing messages and saving that information, it has become a touch-virtual and print speed on this device becomes one of the necessary competencies. 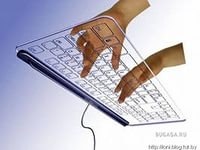 Related articles:
Those who own appliances desatualizado blind typing on the keyboard or just trained skill quick letters by hand, easily mastered and unusual yet the touch pad input. So, where do you start training?

How to learn to write quickly

Strange as it may sound, the first thing you should pay attention to is posture and location of the device. Are you going to write with a pen, typing on a computer keyboard, or learn a touch screen, the posture should be comfortable, back straight, arms slightly bent at the elbow, and a device to type (paper, panel, keyboard, smartphone) lie to the right and at a slight angle. The distance from the eye to the print characters should also be in reasonable limits so as not to strain the body. Typically, this distance is 30-35 cm, or from fingertips to elbow.

The second thing you will need when learning to speed set – the ability to concentrate and not be distracted, to be able to keep in mind the main idea of the typed message. Familiarity with the qwerty layout really facilitates the process of finding the right letters, although to wield all ten fingers on a small screen does not work, but knowledge of the location of the desired symbol will shorten the time you set. Stimulates the learning process set by the timer, the signal which you need to write more number of meaningful words and sentences.

Manufacturers of smartphones and other modern technology care about their customers, so their software contains a large number of common words and phrases, and proper names, a list of which can be adjusted independently. Therefore, you can enter the first two or three characters appear "prompt", significantly accelerating the process of typing standard phrases and expressions. Another nice bonus from the developers – the possibility of voice input. In this case you need only the ability to adjust not quite right detected "smart" machine text.

Something to write on touch screens

Touch screens differ from each other depending on the basis of determine the application of technologies and cost models. So, the cheap supply of alphanumeric keyboard similar to a normal phone, significantly reducing the printing speed even in the presence of a wide experience and enable T9. A more promising Avenue for improving the typing speed is a qwerty layout on the keyboard, as this type has long and firmly entrenched in our ordinary and usual life with the introduction of the first computer input devices.

Founded on the type of technology to determine the coordinates of touch screens divided into capacitive and resistant. It was on the last loading process can be facilitated using the reverse of the pencil, a special stylus and other ancillary items, whereas capacitive screens react to the potential difference, that is, the touch of our finger. Can replace him only a special device – a capacitive stylus, the price of which starts from $ 30.
Is the advice useful?
See also
Присоединяйтесь к нам
New advices