What is interesting mollies black

Black mollies are some of the most popular and common aquarium fish. They are suitable for novice aquarists, at the same time they are engaged in breeding specialists with extensive experience. All are equally interesting and easy to care for. 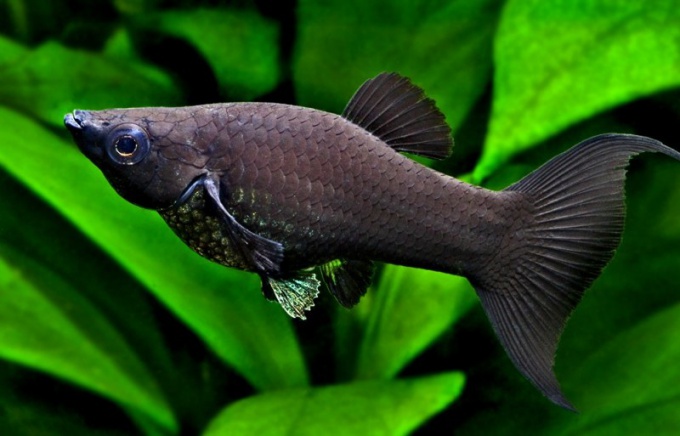 This beautiful fish is mainly spotted coat with a velvety black hue, is found in fresh waters of Central and South America. In Russia fish is rarely found with a natural black color without any inclusions, as she is bred by artificial means.

What are black mollies

Like any other fish, mollies are black varieties. Withdrawn they were not so long ago — in the eighties of the last century.

This kind of as fork mollienesia, got its name for the shape of the tail, which resembles a long black plug with two prongs. But the scarf mollienesia is distinguished by its long, elegant tail fluttering in the water like a silk scarf.

Molinezja black is a hardy fish and does not require special care. The only thing you need to do to protect fish from diseases is to maintain the water temperature around 30 degrees Celsius. And of course, like any other fish, must be present in the aquarium water filter.

Mollies get along well with other peaceful fish. Conflicts can arise with tiger barbs. The atmosphere in the flock of fish feel better with males slightly smaller than females.

Feed them any feed for the fish as well as animal and plant components. In addition to dry food, you must give the fish special vitamin supplements. A newborn fish need to feed "living dust" that are sold in pet stores and has various supplements.

Black mollies can live in the aquarium, under the temperature regime, as well as the equipment necessary appliances, more than 5 years. Six months after the birth of the fish comes puberty.

What is interesting in mollienesia

Bright black color mollies in reproduction only recorded when keeping the fish only one color. If there is a crossing of fish of different color, the black one loses its power, and the body of the fish appear small inclusions in the form of blurred spots of yellow or gray.
Is the advice useful?
See also
Присоединяйтесь к нам
New advices