Snail – it's pretty exotic to domestic latitudes product, whereas in some European countries, they are widely used with aromatic oil, herbs, white bread and hot sauce. To learn the correct way to eat snails, you need to learn the simple etiquette of their use, and at the same time to read the rules of submission of this dish. 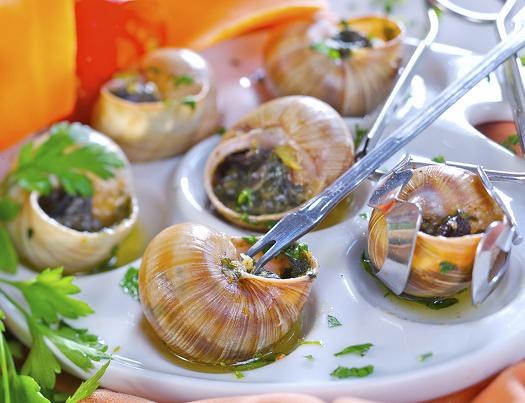 There are approximately one hundred varieties of snails are edible, but most often they can be found in Mediterranean or French regions, where lives and most edible shellfish. The most popular in use is the Burgundy snail, which was first eaten by the ancient Romans and Greeks. The clams with a cream or light-brown shell up to 10 inches in length and is bred not only in Europe but in the United States. The Burgundy snail is almost extinct in the wild, so the Europeans made it to the list of protected species.

Culinary rival Burgundy snail is a snail Turkish – annually it imports more than 600 tons. The variety of edible snails can be found in the South of Russia, by identifying a brown shell with longitudinal stripes of cream color and 2 inches in height. However, even when these snails cannot be eaten without preparation – namely, a two-week feeding of corn flour, which derives from snails all the harmful substances.

Snails are usually served baked or boiled – before cooking they are washed and then boiled in several liters of boiling water for 5 minutes. Then the meat is extracted from shells of mucus is washed in vinegar and water, again boiled with salt, pepper and herbs, after which it can be served with salads, risotto, pasta and zhuleny.

When roasting snails in their shells coated with a mixture of minced garlic, shallots, parsley, lemon juice, melted butter and salt, put in the fridge for 20 minutes, and then baked. One of the most popular restaurant dishes is a tender snail meat, baked in puff pastry baskets and poured with sauce made of Parmesan, spinach and heavy cream.

According to the etiquette of eating snails, they're served with special tongs (tweezers escargots) and thin narrow fork with two prongs and a long handle. Slippery and hot fix snail tongs, remove the meat from the shells with a fork and dip it in the sauce. Then a piece of meat to eat with a piece of baguette and washed down with good white wine. In the absence of escargotel tweezers can wrap the hand towel, take it the snail and gently remove the meat. If snail meat is served without the shells, it is used as a standard, using a conventional fork and table knife.
Is the advice useful?
See also
Подписывайтесь на наш канал