How to make a beautiful lump of hair on the head

The lump of hair could be as simple hairstyle for office, and the main element in the solemn laying. In these two cases, its design will be different. 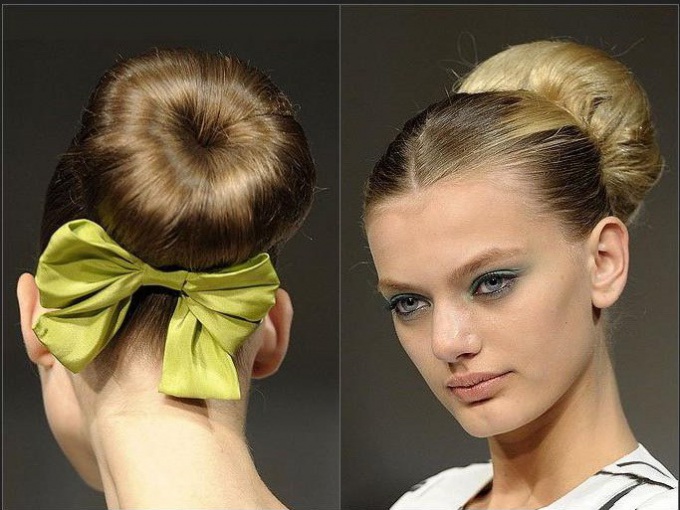 How to make a cone out of your hair?

To create cones fit absolutely any hair: wavy, straight, curly. The main condition is the length below the shoulders. The most beautiful and surround the cones out on long hair. A lump or bundle can be easily done in 5 minutes. Because the technology is very simple. First, comb your hair and treat their styling, especially if they are strongly pushatsya. Then lift all the hair to the level of the top of the head and twist them into a bundle. Tease the hair around the circle to get a elegant shot. To hold it, plug in the base of a few pins. Also the cone can be fixed with gum: just put it on top of the cones. To the beam disintegrated, the hair band must be sufficiently tight.

The appearance of the beam may be very diverse: strict and smooth, sloppy, tall, curvy and so on. If you are doing formal styling with a bump, will release a few strands from the front, may they beautifully frame the face. If you have straight hair, curl strands with a Curling iron or curlers.

Another evening option - a lump of spit. Gather all hair into a ponytail and secure it with a rubber band. Then braid tail braid. Wrap the braid in a circle a few times to get the shot. It remains only to fix it with pins and spray varnish, so the hair is not broke.

It is believed that the tuft on the head creating the effect of a facelift. With this purpose, it often makes such famous stars like Kate moss, Jennifer Lopez.

Donat - a device for creating bumps on the head

To create the bumps on the head there is a special device: Donat. In appearance it resembles a sponge for washing dishes: soft to the touch and pliable. To create a beam with donut pull your hair back into a ponytail at the crown and secure with a rubber band. Can use a thin rubber band for money, as it is small and inconspicuous. Tighten the tail is very tight, so he is not broke. Now comb the hair in the tail and put on top of the donut. Spread the strands in the beam so that it was not visible. The tips of the hair and secure with Bobby pins and invisible. Can re-put on top of the rubber band for money: the hair will be firmly fixed, and the elastic will not be visible.

When creating evening hairstyles bump tie a beautiful satin ribbon and make a bow. Or pull the tail out a wide strand of hair and wrap it around the bundle. The tip of the strands curl: let it gracefully hangs down. For decorative use cones artificial flowers, hairpins with rhinestones, strings of pearls and other ornaments for the hair.

Donation can be made independently of a regular sock. To do this, cut off the front of the sock so that it is turned through. Now remove the sock to wrong side and fold several times. Get something like a clip. Put this fixture on top of the horse's tail. A lump of hair do as well as Donat.
Is the advice useful?
Подписывайтесь на наш канал