With some areas of Russia borders the Moscow region

Moscow oblast - a separate subject of the Russian Federation, which, however, often referred to as just the suburbs. It has common borders with seven other regions and Moscow. 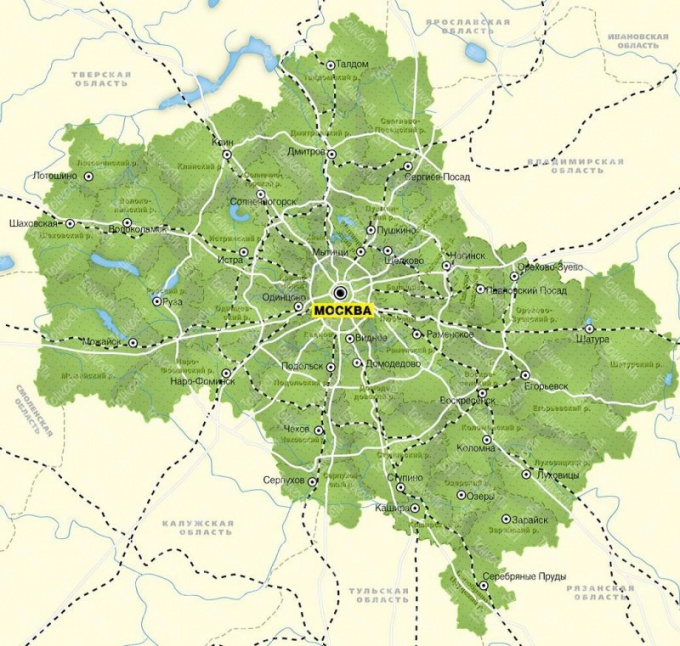 Moscow oblast (MO) - not the most common example of subject of the Russian Federation: while the other regions tend to have a pronounced regional center, which is often the same name of the territory, in the Moscow region such a center is the city of Moscow, which has the status of a separate Federation subject.

As a result the Moscow region has a rather unusual shape: in the center of this area is located in the space, is not included in its composition. Thus, formally we can say that Moscow is one of the subjects of the Federation, which the Moscow oblast has a common border.

In total the region has more than 70 cities, of which about 20 have a population exceeding 100 thousand people. However, even these cities it's hard to call large, especially in comparison with Moscow: the most numerous are the Khimki and Balashikha, the population of each of which exceeds 200 thousand people.

The borders of the Moscow region

Besides Moscow, the Moscow region has common borders with seven regions surrounding its perimeter. The total length of these boundaries is about 1200 kilometers. So, in the North and in the North-Western part of its territory Moscow oblast borders Tver oblast: this boundary is formed Lotoshinskom, Select, Klin, Dmitrov, Taldom and partly Sergievo-townsmen areas. While Sergievo-Posadskiy district of the Moscow region is one of the Champions in the number of neighboring entities of the Russian Federation: it also has a small plot of the common border with the Yaroslavl region, located on the North-East of MOE, and with the Vladimir region.

The border with the Vladimir region in the North-East and East of the territory also form Shchelkovo, Noginsk, Pavlovo-Posadsky, Orehovo-Zuevsky and Shatursky areas. Shatursky district, in turn, borders on Ryazan region, along with Egor, Luhovitsky, Zaraisky and Silver-Prudsky districts located in the southeastern part of MO. Silver-prudskikh district also forms the border with the Tula oblast, which later passes through the Kashira, Stupino and Serpukhov areas, that is, through the southern part of Moscow region.

The border with the Kaluga region in the South-West of Moscow region includes the territory of Serpukhov, Chekhov, Klimovsk, Naro-Fominsky and Mozhaisk areas. Finally, Smolensk oblast borders with the Western part of Moscow region's territories Mozhaysk and Shakhovsky districts.
Is the advice useful?
See also
Присоединяйтесь к нам
New advices