Should I add PVA glue to glue the Wallpaper

In the process of papering beginners repairmen often there are doubts about the strength of the used glue. At this point, first of all, remember about the PVA glue. But how justified is its use? 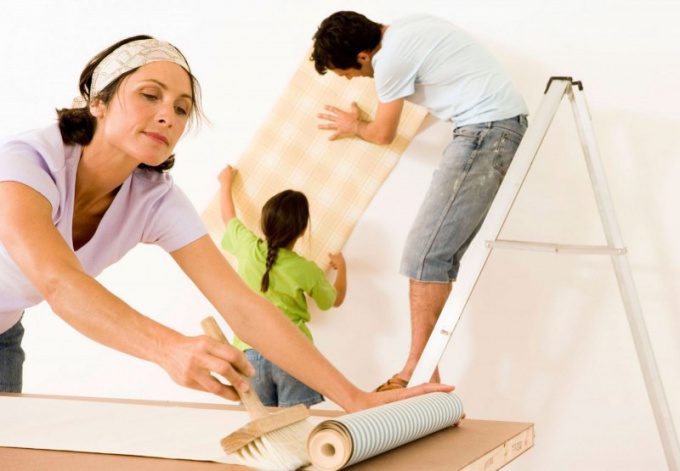 Everything you need to know about PVA

• PVA — dispersion adhesive, in which the particles of polyvinylacetate mixed with water. Bonding occurs when the composition of the evaporated water, and particles of glue adhere together, forming a solid film.


• After this transformation the adhesive cannot be dissolved with water again. This fact determines both positive and negative consequences of using PVA.

• The glue is very dense, it is impossible to apply a uniform layer on the surface of the Wallpaper. Therefore, it is not necessary to use a PVA glue for gluing large panels of Wallpaper. While the Wallpaper paste is added with special substances that contribute to slip and uniform application.


• Because of the dense consistence PVA dries very evenly. In addition, after drying, a film is formed, under which, in the case of excessive amounts of glue, a so-called bag of glue and air. Wallpaper glue dries out evenly, and the Wallpaper looked nice.


• The film formed is not water soluble. After the Wallpaper will celebrate his life and the time comes to remove them from the walls, it turns out that it is not so easy, because the film firmly "soldered" them to the wall.


These shortcomings of PVA glue makes it not the best choice for Wallpaper pasting.

Add PVA glue to the Wallpaper

It might make sense to just enhance the action of conventional Wallpaper paste by adding PVA? Today, experts believe that the modern variety of professional adhesives for different types of Wallpaper, there is no reason to complicate your life by mixing Wallpaper paste with PVA. But PVA glue is perfect for poklejki small areas, the lagging fragments and joints.


Modern developments in the construction industry allow us to solve almost all problems. Adhesives, which are presented in a wide variety of already have everything you need to conveniently and efficiently produce the wrapping.


It is only important to choose the right adhesive according to the type of Wallpaper, read the instructions and perform the simple process of dilution of the adhesive. In some cases, will need pre-primed surface of the walls.


If you are in doubt of the correct choice, it makes sense to consult specialists and get the right advice to protect yourself from unwanted nuances.
Is the advice useful?
See also
Присоединяйтесь к нам
New advices