As appeared in Russia serfdom

Serfdom in Russia began later than in European countries, and lasted for several centuries. The gradual enslavement of the peasants objectively reflected in the main legislative documents of the time. 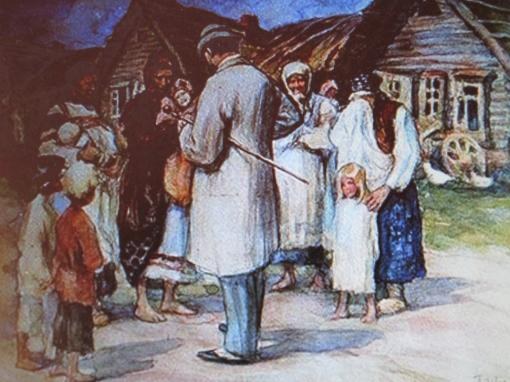 Related articles:
Instruction
1
According to the famous historian V. O. Klyuchevsky, serfdom is "the worst form of" bondage men, "pure tyranny". Russian legislation and the government's police measures "attached" peasants to the land, as was the custom in the West, and to the owner becoming the absolute master over a dependent people.
2
Land is the main breadwinner for the peasantry in Russia for many centuries. Private "ownership" was given to the person easily. In the 15th century most of the Russian territories was unsuitable for agriculture, forests covered vast expanses. Produced at the cost of enormous labour arable land based lodges. All land holdings were owned by the Grand Duke and homesteading used self-developed arable land.
3
The land owning boyars and monasteries touted by the new farmers. To settle in a new place landowners provided them with benefits in the performance of duties, helped start a private farm. During this period, people were not attached to the land, had the right to look for more suitable living conditions and to change the place of residence, choosing new landowner. Private verbal contract or "row" the record has served to establish relations between the land owner and the new settler. The main duty of the farmers considered the performance of certain obligations in favor of the owners, the most important of them - dues and corvee. For landlords, it was necessary to keep the workforce on-site. Between the princes even established treaties "neperemozhne" peasants from each other.
4
Then in Russia the era of serfdom, which lasted long enough. It began with a gradual loss of the ability of free migration to other areas. Burdened by exorbitant payments to farmers could not repay debts they had run from his landlord. But according to the law accepted "time limit years" the landlord had full right to look for the fugitives in the sequel to the five (later fifteen) years and return back.
5
With the adoption of the sudebnik 1497 serfdom became legally to take shape. In one of the articles in this collection of Russian laws stated that the farmers shift to another host is permitted once a year (week before and after St. George's day) after payment of the elderly. The size of the ransom was considerable and depended on the duration of residence in the land of the landowner.
6
In the Sudebnik of Ivan the terrible St. George's day remained, but the fee for the elderly increased significantly, it was added to the additional fee. Dependence on landlords was strengthened by the new article of the law on the liability of the owner for the crimes of his peasants. With the beginning of the census (1581) in Russia in some areas it's "protected years", in people there was a ban on care even in Yuriev day. At the end of the census (1592) a special Decree was finally repealed resettlement. "Here's to you, grandma, and St. George's day," began to speak in the people. For farmers there was only one way out, an escape with the hope that they will not find.
7
17th century – the era of the strengthening of autocratic government and a mass popular movement in Russia. The peasantry was divided into two groups. At the manor, monastery lands were the serfs, which had the performance of different duties. Chernososhnyh peasants was controlled by the authorities, these "tax the people" were obliged to pay taxes. Further enslavement of the Russian people was manifested in various forms. During the reign of Mikhail Romanov landowners were allowed to give up and sell serfs without land. When Alexis Conciliar code of 1649 peasants were permanently attached to the land. The tracing and return of fugitive became indefinite.
8
Serf slavery was hereditary, and the right to dispose of property dependent people received the landowner. The debts of the owner of the covered property of peasants and slaves. Police surveillance and court inside the estate to administer their owners. The fortress was completely powerless. They couldn't without the owner's permission to marry, to have a legacy, to speak in court. In addition to the duties before his master, serfs had to perform compulsory service for public benefit.
9
Legislation has placed certain obligations on landlords. They were punished for harboring a runaway, a murder of others serfs paid taxes to the state for runaway peasants. The owners had to give his serfs the land and the necessary equipment. It was forbidden to take away from dependent people to land and property, turning them into slaves, to set free. Serfdom gained momentum, it spread to the Palace and chernososhnyh peasants, who now lost the opportunity to leave the community.
10
By the early 19th century in connection with driven to the limit of dues and corvee between landowners and peasants was intensified the contradictions. Working for his Lord, the serfs were not able to do their own farming. Policy of Alexander I, serfdom was unshakeable Foundation of government. But the first attempt of liberation from serfdom was approved by the law. By the decree of 1803 "On free cultivators" were allowed redemption of individual families and entire villages with the land by agreement with the landowner. The new law has made little change in the situation forced people to redeem and to negotiate with the landowner, many can not afford. And in a significant number of landless laborers, the decree does not apply.
11
The king liberator from serfdom was Alexander II. The February Manifesto of 1961, the peasants declared personal freedom and rights of the citizen. Current life circumstances led Russia to this progressive reform. The former serfs became for many years "temporarily" paying the money and who is serving compulsory labor for the use of the allocated land allotments, and until the early 20th century were not considered full members of society.
Is the advice useful?
Присоединяйтесь к нам
New advices