How to play the borax

Borax is a simple but very addictive and exciting card game. This game is famous because of great popularity among the prisoners, but on the outside she found many admirers. 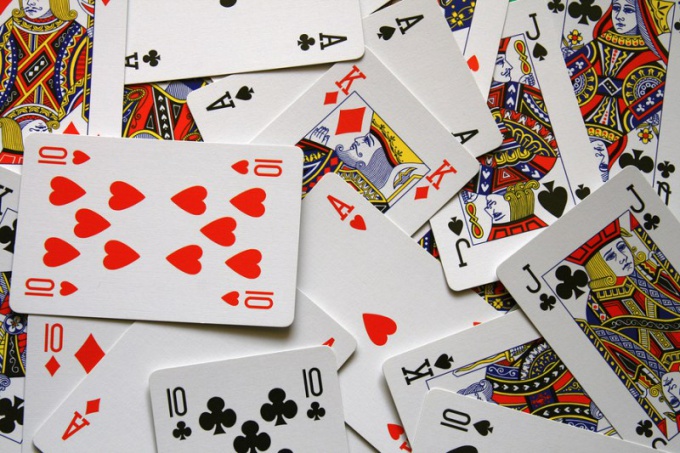 Related articles:
Instruction
1
For the game uses a regular deck of cards – 36 pages. To participate in the game can two people or more. The maximum number of players is determined by the number of cards in the deck. However, the optimal number of players is two or four. When borax is played from lots of people, all the gameplay loses its excitement and interest.
2
The aim of the game is to score 31 points. Jack – 2 points, Queen – 3, king – 4, 10 is 10 and ACE is 11 points. Other cards have no value.
3
The order of the distribution determined by lot, the following dealer is the one who won the previous hand. Cards are dealt one at a time. All players should have three cards, then immediately opened trump.
4
The first walks the player who is to the left of the dealer. Next moves making the one who takes the last trick.
5
The player has the right to go one, two and even three cards, but these cards must be of the same suit. Competitors must put the same number of cards. Bribe takes the player whose hand is higher. If the cards are beaten by the opponent, the trick goes to the opponent, if at least one card is not beaten, the trick is won by the one who made the move. If the card went broken, then the next player in order to win this trick, obliged to interrupt the smashing player.
6
Taking cards from the deck performed alternately: players take from the deck one card until reaching the hands of three cards. The first takes a card the player who collected the bribe, he also will own the right next move.
7
If a player is not able to beat the cards, who made a move, he has the right to put discarded cards face down. These discarded cards in any case can not be opened. Any attempt to turn will result in the end of the game.
8
Wins the game the player who scored 31 points. To announce that amount only on his turn.
9
A combination of "drill" are the three trump cards. If during the game someone is "drill", that player wins immediately, regardless of the number of earned points.
10
The combination of a "letter" or "pullets" — three cards of the same suit, but not trump. If the player "pullets", it is entitled to extraordinary progress.
11
All played cards must be flipped. Players are not allowed to look in the end.
12
If a player accidentally announces the end of the game, and the scoring reveals that he's not scored 31 or more, then he immediately loses.
13
The player is a loser when it begins to draw cards from the deck without waiting or suddenly took an extra card.
14
Like any other popular card game, borax has many varieties. For example, by prior arrangement, players can play open cards or "light" can be played by one player, and for that he deserves some points for compensation.
Is the advice useful?
See also
Присоединяйтесь к нам
New advices