Where is the icon "the inexhaustible chalice"

The mother of God has always been one of the most venerated saints in Russia. She is the patroness of Russia, so there are many icons depicting her image. One of them – "the inexhaustible chalice". 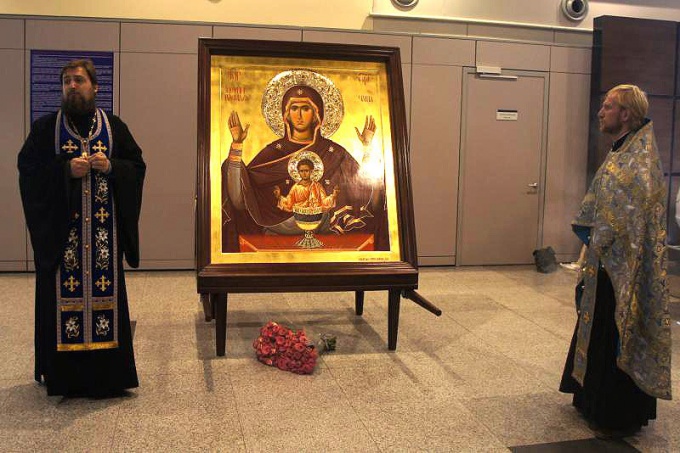 Related articles:
No one knows what the painter created an icon called "the inexhaustible Cup", and when it happened, but a famous icon not so long ago, in 1878.

This image belongs to the iconographic type of the Orans: the mother of God is depicted with upraised in prayer hands and Jesus is the baby standing before her in the bowl, stretching out his arms in a gesture of blessing.

The finding of the icon

About the finding of the miraculous icon in 1878 he described in 1910 Elizabeth – nun Vvedensky Vladychny monastery, which is located in the city of Serpukhov (Moscow region). The name of the icon associated not only with the bowl shown, but with the history of the discovery.

Lived in the Tula province, a peasant – a heavy drinker. He was drunk and pension he received as retired Nikolaev soldiers, and all that he had. In his old age came to extreme poverty, and because of constant drinking can't feel my legs. And there appeared to him in a dream the old man, which he commanded to go in Vvedensky vladychny monastery, and there to serve a moleben before the icon of the Mother of God "inexhaustible chalice". The farmer was in no hurry to do his bidding – he couldn't walk, and there was no money, but the old man had appeared to him twice, all the more menacingly repeating the order. In the end, this poor man, somehow moving on all fours, went to Serpukhov.

It was hard to get to the monastery, but still he managed to do it, that's just about the icon with the same name nobody knew. Still the words of the farmer to be taken seriously, examined all of the icons, which were just in the monastery, and on the back of one of them, which hung in the passage from the Cathedral into the sacristy, found the inscription, "the inexhaustible chalice".

The loss of the icon

After finding the icon was in Vvedenskoye will Vladychna the monastery, but in 1919 it was closed. The icon was moved to the Cathedral Nikola White, located in Kaluga. But 10 years later it was closed and it and all the icons were burned. Was burned the icon "the inexhaustible chalice" or someone managed to save her is unknown.

In 1992 and 1996 based on old photographs was written two lists of icons. The first is located in the Serpukhov Vysotsky monastery, and the second in the restored Womenscom will Vladychna convent. Both images are considered miraculous.

Before the icon "the inexhaustible chalice" pray for healing not only from disease but also from alcoholism and drug addiction.
Is the advice useful?
See also
Присоединяйтесь к нам
New advices