Almost all people are afraid of thunderstorms or, at least, fear it and prefer to wait in a safe place - and this is the right approach. The sky darkens and tightens, the sun disappears, but the thunder and gleaming lightning – nature on the rampage, and it can be dangerous. 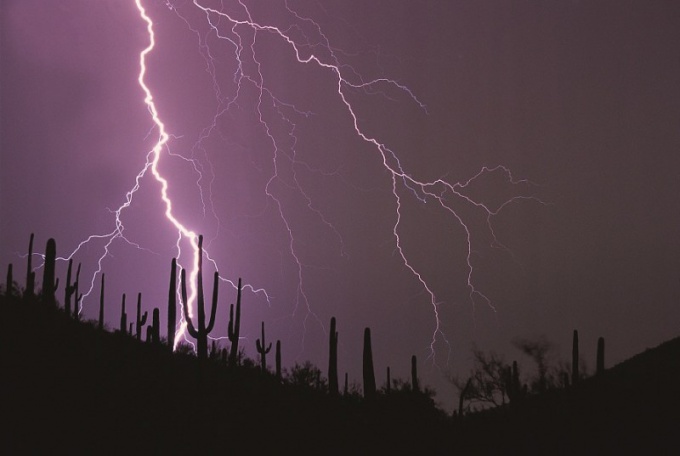 Related articles:
The storm – a natural phenomenon of the same name, which have more clear. When everything lights up with flashes, accompanied by thunder, which typically follows a heavy downpour, the questions inevitably arise: "What's happening?", "Where does lightning and why is it so bright sparkles?". The nature of lightning electrical.Storm clouds is a real giants. They and the ground seem huge, but there is still not clear how big they are. The height of the thundercloud medium size is several kilometers. Inside they're not as calm as it may seem from the outside. Air currents in the cloud move chaotically in all directions, all there "bubbling and boiling". The temperature in the cloud is also not distributed evenly. At the top it is usually very cold, about -40 degrees Celsius. Water, which is a major component of the storm clouds, at this temperature, of course, freezes. The formation of small pieces of ice, which are worn inside the cloud in the same way as an ordinary drop of water: with great speed and very erratically.Icicles constantly collide with each other and with water, they are charged with electricity and collapse. The heavy moved closer to the bottom of the clouds and there is usually a melt, sometimes it falls as hail. Pretty quickly the opposite electric charges in the cloud are concentrated in different areas: at the top is dominated by positive and down is negative, but seething inside is not terminated. Sometimes there are strong currents when the positive and negative facing particles simultaneously.The thundercloud is a very large formation, and when two powerful whirlwind, charged oppositely faced, a strong electric discharge. This is zipper. She was dazzling, instantly heating the air around him to a very high temperature so that it explodes. Thunder is the explosion of air masses, heated by electric discharge.Himself electric discharge can take direction or from one part of the cloud to another, or from them to earth. If lightning hits the objects located on the earth, it is easily split even large stones, and anything that burns, from her blow ignite.Lightning is attracted to all that rises above the rest of the landscape. So to protect homes, people invented the lightning rod: is the metal poles that divert the current into the ground, and in this way neutralize it. But if the storm began, and you are not at home, then do not hide under tall objects, such as under trees. Because the probability that lightning will strike one of them.
Is the advice useful?
See also
Подписывайтесь на наш канал