How to learn wood carving

Woodcarving is a craft that developed among all peoples of the world, because wood is a material that gives warmth and comfort. But not all trained in this useful craft. 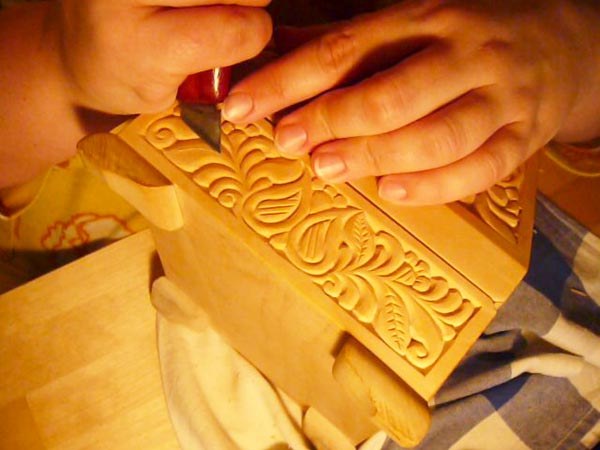 Related articles:
Thousands of people around the world are carving. In order to master this craft, start with a simple manipulation. Who wants to learn wood carving you will need two knives. One of them has to be a pen and well-honed. And the other a knife - jamb. By the way a knife-jamb, you can even make yourself.

Ideal for carving will become a balcony, as there you will not disturb others. Now you need to choose the material. For beginners a great option would be alder, aspen or lime. These wood species are easily cut not only along but also across. This leaves a smooth cut.

In the carving provides a lot of different styles. But for those who are just learning this skill, will approach a triangular-notched thread. It is also called geometric. The technique of cutting the elements of a geometrical carving includes two main stages - stabbing and cutting.

To clip the triangle, apply a dot in its Central part and insert the tip of a knife-jamb. Point the heel of the knife to the top of the triangle and push down on the handle so that the spout has entered the wood a few millimeters. From the midpoint make getting to the other vertices of the triangle. Thus it is necessary to rotate the Board, not the knife. After impaling proceed to the trimming.

Holding the joint at a 45-degree angle to the surface of the Board, put it to the top of the triangle and guide the tip along the sides of the triangle. The nose will gradually deepen. If pruning is done accurately and correctly, from the Board to separate the compact triangular pyramid. Then rotate the Board one hundred and twenty degrees and do the next cut. Remove the next piece. Keep doing the cutting in the same spirit, and gradually have selected all of the items.

With this obtained knowledge it is possible to begin to engage in more complex carvings. It is recommended that at the initial stage not to use expensive professional tool. Tools you will accumulate gradually, with the growth of his skill. Of course, ideally it would be nice to watch a professional Woodcarver to take into account some of the nuances of this work. As study material, you can use Internet resources. You will also need a lot of patience to do the carving.
Is the advice useful?
See also
Присоединяйтесь к нам
New advices