How to change a mass number of the decay

The nuclei of atoms consisting of protons and neutrons, undergo various transformations in nuclear reactions. This is the key difference between such reactions from chemicals that affect only the electrons. In the course of the disintegration may change the charge of the nucleus and its mass number. 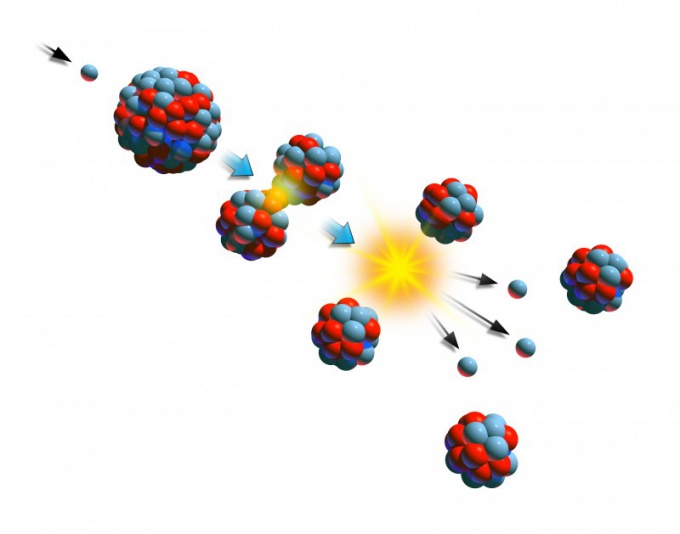 Chemical elements and their isotopes

According to modern chemical concepts, the element is a type of atoms with the same nuclear charge, which is reflected in the index number of the element in table of D. I. Mendeleev. Isotopes differ in number of neutrons and, therefore, the atomic mass, but since the number of positively charged particles — protons — is equally important to understand that we are talking about the same item.

The proton has a mass 1,0073.e.m. (atomic mass units) and charge +1. Per unit electrical charge passed charge of the electron. The mass of the neutron is electrically neutral – 1,0087.e.m. To indicate the isotope, you must specify the atomic mass which is the sum of all protons and neutrons, and the nuclear charge (number of protons or, equivalently, a sequence number). The atomic mass, also called the nucleon number or the nucleon, usually recorded at the top left of the element symbol and the sequence number on the bottom left.

The same form is used for elementary particles. Thus, β-rays representing the electron and having a neglectfully small mass, is credited with a charge of -1 (bottom) and a mass number of 0 (top). an α-particle is a doubly charged positive helium ions, so they are denoted by the symbol "He" with a nuclear charge 2 and mass number 4. Relative mass proton p and neutron n is taken as 1, and their charges respectively equal to 1 and 0.

The isotopes of the elements usually do not have separate names. The only exception is hydrogen: its isotope with mass number 1 is protium, 2 – d-3 – tritium. Introduction special items due to the fact that hydrogen isotopes are maximally different from each other on the ground.

The types of radioactive decay

Radioactive isotopes, natural and artificial, spontaneously disintegrate with the emission of α or β particles to form a stable isotope.

Talking about the three types of spontaneous nuclear transformations: α-decay, β-decay and γ-decay. In α-decay the nucleus emits an α-particle consisting of two protons and two neutrons, resulting in the mass number of the isotope is reduced by 4, and the charge of the nucleus by 2. For example, radium decays into radon and helium ion:

In the case of β-decay a neutron in an unstable nucleus turns into proton and the nucleus emits a β-particle and antineutrino. The mass number of the isotope does not change, but the nuclear charge increases by 1.

In the γ-decay of excited nucleus emits γ-radiation with a small wavelength. The energy of the nucleus decreases but the nuclear charge and mass number remain unchanged.
Is the advice useful?
See also
Присоединяйтесь к нам
New advices