How to feed Vietnamese pigs

Vietnamese pigs, as well as their other relatives, are very undemanding in food, but they still exist. This is due to the special structure of their digestive system. Have Vietnamese pigs, a small volume of the stomach and small diameter intestines. However, the diet of piglets is significantly different from the food of the adult. 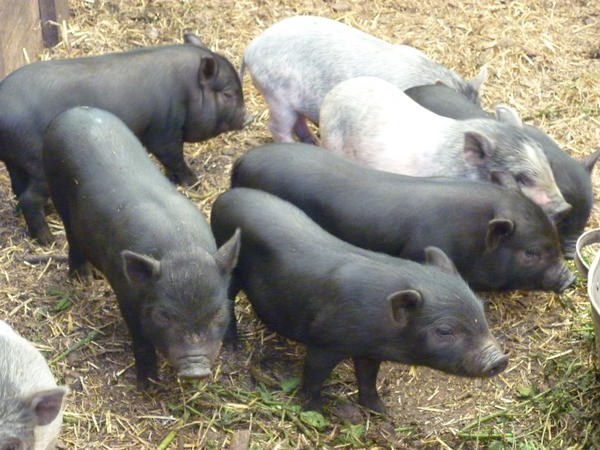 Related articles:
Instruction
1
In the first days of life the piglets feed on their mother's milk. At this stage it is necessary to pay attention to some points. Sufficient quantity of milk received by each of the piglets (this will help later to avoid problems such as delay in development). Whether they have any symptoms of anemia: pale, reluctant sucking milk, retarded growth and development.
2
Anemia in piglets can occur due to deficiency of iron in the blood because the milk of the sow is no required number of such important elements as copper and iron. In order to avoid the loss of calves in the first days of life, they need to do intramuscular injection of drugs: "E-Selenium" and "Feroglobin"
3
The gradual introduction of feeding can be done within a week after birth piglets (by this time they already appear teeth), it should include chalk, red clay, charcoal, that is, those substances that are rich in calcium, phosphorus and iron.
4
At ten days of age the food can be added roasted barley and install in a cage a water bowl with clean water, the weight of the animal should not be less than 1 kg. If the number of pigs is large, and you see a lag in growth in some birds, they need extra feeding and fortification of the drug "wet".
5
The introduction into their diet of thick porridge with the addition of premixes, oat milk and granulated starter feed "For piglets first days of life" can be carried out after two weeks from the moment of birth. In the same period, should gradually give and vitamin feed, consisting of zucchini, pumpkins, carrots and hay legumes. In summer, these pigs can eat mostly plant food. Because of this they were called — grazing pigs.
6
The amount of milk the sow starts to decrease towards the end of the first month, by that time, the piglets should be able to eat independently. Separation from the mother should take place gradually over 5-6 days, thus it will be able to avoid any diseases in sows (e.g. mastitis) and not cause physical and psychological harm to the young. Weight menstruation piglets to comply with the above order of feeding at this age should be not less than 2.5 pounds.
7
When the final transfer piglets to feed should very carefully study its composition. Its structure should include 20% protein, 5% fat and fiber, of not less than 3%. Only with proper diet you will get high quality meat, which is famous for Vietnamese pigs.
8
Of the products that should not be included in the diet of piglets, it can be noted food waste, bread, corn and oats, as they provoke the deposition of excessive fat.
Is the advice useful?
See also
Подписывайтесь на наш канал