Conflicts between daughters-and mothers-in-law are quite frequent. It is especially difficult to get two women in one apartment, because to ignore each other in this case is almost impossible. 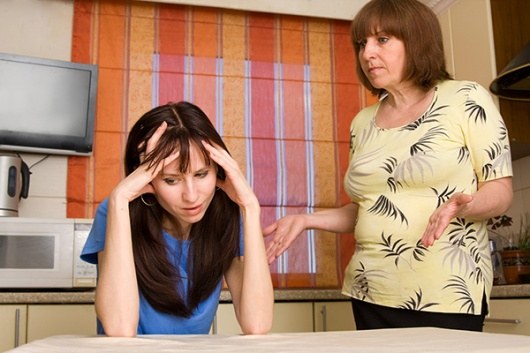 Related articles:
Instruction
1
Two mistresses are difficult to coexist peacefully in the same apartment. Every woman has their own idea of purity, comfort and need for household chores. For example, mother-in-law believes that it is necessary to wash the floors every day, and the daughter-in-law enough 2 times a week. One woman is not without dinner 3 course, and the other keeping fit, not eating after 6pm and introduces her husband to a healthy lifestyle. Do I need to iron sheets? Mother-in-law certainly does, and daughter-in-law doesn't want to waste time on it.
2
Each of the women their view on the household and it makes her uncomfortable to live by someone else's rules. Therefore, conflicts on home soil is almost inevitable. Mother-in-law are often the best of intentions wants to teach the daughter to do everything "right." Young wife takes advice as criticism, resentment and invasion of personal space.
3
Often the mother intervenes not only in farming but also in personal matters between a son and his wife. Some moms impartial speak about their daughters, and sometimes lash out at them and spoil this relationship in the family of his son. Mother in law wants to have her baby was the perfect wife, so the criticism daughter-in-law is always there. Some mothers are not willing to realize that my son is grown now and has the right to live their lives. In turn, the sister-in-law, tired of the intervention mother-in-law in all family matters, often put the husband before a choice: "either I Or she."
4
Often mother and wife vie with each other for the love of the son and the husband. Both require gifts are not worse than he gave the second woman. The mother-in-law may consider that the son unduly indulges his wife and daughter-in-law think that her husband too much money from the family budget is spent on the mother.
5
When in a young family there are children, there is another reason for conflict. Over the past 20 years the recommendations of pediatricians and psychologists in relation to the care of babies has changed dramatically. Mother-in-law, based on its experience, can offer to start feeding with 3 months, to give the baby a pacifier to a newborn dopisivati. Mom can feed the baby up to six months exclusively breastfed, not to give pacifier and wearing a baby in an alien to the older generation sling. Despite the fact that both women want the best for baby, they can make the house unbearable psychological atmosphere, and it will affect, primarily, on the child.
6
Therefore, more and more families are struggling to start to live separately from their parents. If young people have no money to buy a home, they moved to a rented apartment.
Is the advice useful?
Присоединяйтесь к нам
New advices