How to alter pants for pregnant

During pregnancy you can flaunt in your favorite pants, making them original using one of the proposed ways to increase things. The process will not take more than 40 minutes. 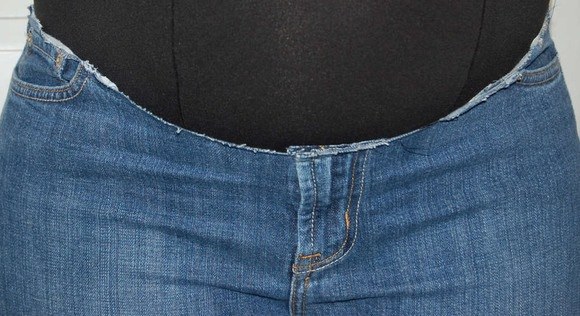 Three methods for the rapid increase in Trouser waist

There are several techniques that will allow you to turn regular pants into maternity pants. The tummy starts to grow immediately. In the first months of the child's expectations at three simple ways to increase pants in the waist area.

Usually tummy to 2.5-3 months out of the child increases slightly. Take a piece of underwear elastic. Thread it into the hole for the loop. Stitch between the two ends of the elastic. Bend it in the shape of a figure eight and put the other half of the gum on the button. Have to use another trick. Do not fasten the zipper to the end. To hide this, wear over trousers loose t-shirt, a tunic.

The days go by, the tummy has increased and this method is not enough. Can add to it. Gently strut outer side seams and pristrochite to them wedges of knitwear. They have the shape of a triangle, the angle of which is directed downwards.

The third method will make pants for pregnant of extravagant. If they inset side pockets, uplift them. In their place sew knit semi-circular insert. They repeat the form of pockets. Choose fabric color to match the main or one that will contrast with it. You can show off these items of apparel, if you make them knit with gold or silver color.

The increase of the pants during the second half of pregnancy

When tummy became even more, take advantage of other ways to alter pants for pregnant women the lower part of the apparel. Put them on the Desk or on the floor of the front part of the upstairs. Take a piece of chalk and a ruler. From the point where the end of the zipper, guide the line to the right side. The same line of draw and to the left. Cut out the triangle. It is not required. In his place, sew a triangle of stretchable knit. The base of this shape should be large, then the tummy will not be crowded. To guess with the cut, measure the volume of the stomach, then the waistband of the trousers. Subtract the first number of the second. The result put at the base of the triangle. It will be held along the line of the belly, and the top of this geometric shape will be at the bottom.

In the last months of waiting the baby will be very comfortable in trousers, and knit the yoke. It can only be done in front or around the entire circumference of the abdomen. If you want to insert the front yoke, draw a straight line which is parallel to the belt. It passes through the middle or bottom part of the zipper. Front cut out the resulting rectangle. In his place, sew the other – knit the desired volume. That yoke looked better, a little zakruglenie her front, holding up the line at the sides.

If you want to make a circular yoke, you get a continuous solid line from the point where the middle of the zipper. Sew the bottom slit. Sew up a knit in the form of a wide belt. If it is thin, fold it twice, attrocity the top, insert the elastic band. The new clothes from old clothes ready.
Is the advice useful?
See also
Подписывайтесь на наш канал