What a Foundation is to choose a under the wood

The decision on the choice of Foundation for construction is influenced by many factors, including the type of soil and the load on the base. The wood is quite a popular building material with cellular structure, characterized by lightness, resistance and reliability. Construction of houses made of this material gives the opportunity of building with a small static load, so the design process to pay attention to simplified versions of the foundations. 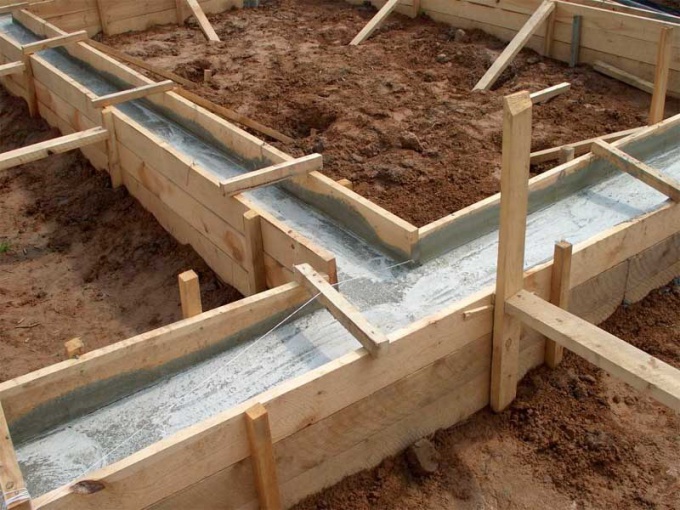 Types of foundations for concrete blocks

Weighted Foundation for the construction of buildings from foam blocks will lead to unnecessary expenses, which does not justify itself. Therefore, already at the initial stage of building a house from such material benefits are quite obvious. The most suitable for the foam blocks are considered to be three types of foundations: strip, bar and plate.

Each type is used depending on the structure of the soil, the values of its heaving, the depth of groundwater. For example, if groundwater is located at a depth of three meters and more, for house of foam blocks fit low-depth continuous footing. It differs in that the trench for that foundations go deep into the earth at a distance of 50 cm, so dig such pits under power.

Trench depth of 50 cm are located around the perimeter of the house and under planiruem bearing walls. The Foundation should be expanded walls themselves 100 mm at the bottom should be laid a bed of sand and gravel in the layer 2, the thickness of each of which is approximately 10 cm and Then install the formwork and laying of two-layer reinforcement case. Suits metal rods with a diameter of 10 mm. the concrete Casting is performed at once in all the trenches. To prevent rapid drying of concrete in summer its surface is sprinkled with water and covered with foil after the beginning of the seizure. The solidification of the Foundation continues for one month from the date of casting. When building on a plot with high level groundwater Foundation protect waterproofing material.

Depth of the reinforced concrete columns equal to the depth of soil freezing, but it cannot be less than 1 meter. The distance between the posts varies from 1.5 to 2 m. If the planned house consists of three floors, this type of Foundation under concrete blocks are usually strengthened by reinforced concrete grillage. Formwork at pier base has a bottom, supported by special supports, which are installed in the ground. The frame of the armature is attached to the mounting hinge posts by means of special tie wire. Used concrete grade M200 and rods with a diameter of 8 mm.

The Foundation slab for the construction penoblokov arranged on any type of soil except clay. This type of Foundation is called floating because of its ability to move together with the soil, not allowing the walls to collapse. In the construction of floating base of blocks under the entire surface of the house dug a pit 60 cm Of the full depth of the trench 40 cm allotted under the pillow of sand and gravel, the layer thickness of which is equal to 25 and 15 cm, respectively. After that is made by waterproofing and set the frame. It contains two layers of rebar with diameter of 8 mm and in increments of 25 cm between the bars. This Foundation has great strength due to the hard reinforcement.

The above information about the types of foundations gives a brief idea about their characteristics, which allows to make an optimal choice of type of Foundation, given the structure of local soil, number of floors and size of the house from foam blocks. There are other types of bases, but they are used for heavier materials. As a rule, private construction the optimal construction of a belt of low-depth foundations for penoblokov home. One of its advantages is the ability to build a basement.
Is the advice useful?
Присоединяйтесь к нам
New advices