How to glue a film on the phone

Stick the protective film on the mobile phone display is not the easiest task for a beginner. It is necessary that such a film is smoothly formed on the surface of the screen and stayed there for a long time. To do it right, use the simple guidelines. 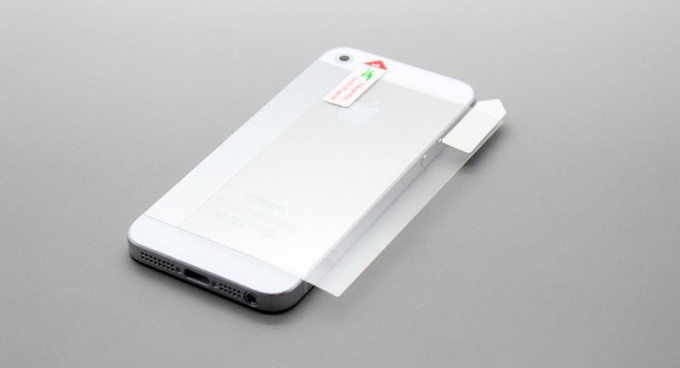 Related articles:
You will need
Instruction
1
Before you begin gluing the film on the phone, and remove from the screen surface all the accumulated dust, crumbs and fingerprints. For this it is best to use special tools. Perfect wipes for cleansing the screen of a computer monitor. Unlike wool, the other napkins or tissues, they don't leave lint and streaks on the display. If you use alcohol, the surface of the mobile phone display can suffer significantly.
2
When you wipe the screen, hold the camera behind the rear panel. It is best to put the phone on a dry and clean surface - for example, on the window sill. In the room there should be dust, as it will quickly become wet to settle on the display.
3
To stick the protective film on your mobile phone, remove it from the packaging and place on a dry and clean place. On the tape you can detect security labels. They should not be immediately removed. First look at the inscriptions on them are. They indicated figures (1 and 2) that it is clear which side to glue the film.
4
Lay out a mobile phone. To correctly stick to the tape, first attach it right side to the display. Then carefully, trying not to leave a trace on the film, peel back the protective sticker. It is required to do to width and length.
5
Attach freed from the protection of the edge of the film to the display. Do it slowly, carefully applying the tape to lay flat. Let's see how well it adheres to the edge of the display. If necessary, gently correct her. Try to film clearly went to his place: if it is glue and remove more than 3 times, it will not hold on.
6
When one edge of the film will lie exactly on the line of the edge of the screen, you can remove the rest protective sticker. Should not rush, take it gradually in the direction from top to bottom. Need to do so: when will be glued on one edge, continue the process from the top of the screen. This way you will be able to help the tape stick to your finger without touching the screen.
7
Scroll to the bottom of the display. When you paste the film on it can cause bubbles. To avoid this, in the course of sticking gradually and very carefully smooth each pasted millimeter film. Because of this you will not allow air to get between her and the screen.
8
If you are not able to avoid bubbles, try them out. For this you can use a calendar, a ruler or credit card. Just swipe the display upper corner, going down. Thus accumulated under the film air out, and the screen surface will remain smooth. However, do this carefully to avoid scratching the protective film. Do not use for this purpose any sharp objects to damage her and the display. Stick the film on the mobile phone is not so difficult, here the main thing — accurately to define its position on the screen to do everything efficiently and gradually, do not rush.
Is the advice useful?
See also
Присоединяйтесь к нам
New advices