What to do if your child hurts the ear

The ear is a complex organ located near the brain and directly connected with the nasopharynx by the auditory tube. In infants, this passage is wider and shorter than in children 4 - 5 years, which facilitates the penetration of infection into the middle ear colds. 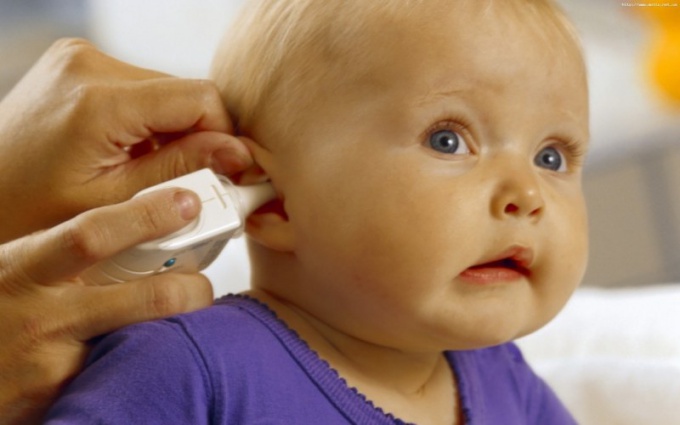 Related articles:
The most common cause of ear pain is an inflammatory process occurring either in the external ear (Pinna and external ear canal) or middle ear (tympanic cavity and membrane, auditory tube, mastoid cells of the temporal bone). It is important to note that the auditory tube connects the tympanic cavity, on the one hand, and the nasopharynx.

The inflammation of the outer ear (otitis externa) is expressed in the swelling and redness around the ear canal. Causes include: infection via cracks in the skin, inflammation of the hair follicle (furuncle) in the ear canal. When infection of the skin steptococcal group And occurs erysipelas, swelling, and redness of the ear, the appearance of bubbles on the skin of the external auditory canal. This dramatically increases body temperature, to 39оС.

The main manifestation of acute otitis media - ear pain, which informs the infant cry, he tries to go to the big ear, refuses to eat because the sucking and swallowing makes it worse. Sometimes very quickly, for one day, acute otitis media becomes purulent, the pus breaks through the eardrum and is released from the outer ear. With the rapid course of the disease and late treatment complications: mastoiditis (inflammation of mastoid process of temporal bone), characterized by pain behind the ear, its redness and swelling; syndrome of irritation of the membranes of the brain, which can spread the inflammation. It is expressed in convulsions, vomiting, decrease in motor activity.

Any history of ear disease should call a doctor, as dangerous forms of otitis media are in the inflammation of the outer ear, and inflammation of the middle ear. The doctor prescribes antibiotics and local treatment (warm, compresses, ear drops, vasoconstrictor nose drops). Before the arrival of the doctor if there is purulent discharge, it is necessary to warm the ear with a compress or inserted into the ear cotton wool soaked in Bourne alcohol, or warm any other way to reduce the pain.

For alcohol or vodka compress take four-layer gauze larger than the auricle, 1.5 – 2 cm, in the middle cut a slit for the ear, soak the cloth in vodka or alcohol solution (the ratio of the water and the spirit 1:1) and apply on the ear, placing the ear in the slot. Put the wax paper also on 1.5 – 2 cm more gauze, cover with a piece of cotton that will cover the paper. Secure the poultice in a handkerchief, tying it on the child's head. Keep the compress 3 - 4 hours. Purulent otitis compresses and heating is strictly contraindicated.

Ear drops with anti-inflammatory and analgesic effect of pre-heat to body temperature, lowering of the pipette with a dose of drops in hot water. Take a rod of cotton wool and gently place it into the ear canal. Warm the medicine should be applied to the wool 3 to 4 times a day. Bury drops in the ear is not recommended, as in purulent otitis media, that is, when broken eardrum, they can get into the middle ear and bring great harm instead of good.

In the treatment of otitis media is necessary to ensure the baby is free nasal breathing. Rid the nasal passages of mucus with pear-suction and flagella, twisted out of cotton wool soaked in baby massage oil. Babies turn from one side to the other to avoid stagnation of mucus in the nasopharynx. On the child's head put on a scarf or bonnet, covering the ears. To bathe the child during illness not recommended to walk only when the pain disappears in the ear.
Is the advice useful?
See also
Подписывайтесь на наш канал