The pedestrian can cross the road outside the crosswalk, if there are none nearby and the roadway is clearly visible. Unfortunately, these rules are often violated. 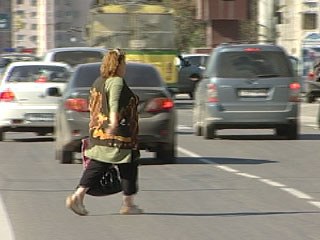 The vast majority of pedestrians cross the road as it suits them, often contrary to common sense and disregarding their own safety. According to traffic police of Russia for 4 months of 2014, the accident injured a pedestrian 7482, 1288 of them were killed.
In the case of pedestrians, even the fault of the pedestrian, the driver is waiting for a long and unpleasant consequences.

First and foremost, the police initiate the verification of the actual impact for the decision of a question on excitation of criminal case. The test will be conducted in two directions:
1. The establishment of the possibility to avoid arrival on the pedestrian in the specific case; whether there has been a violation of driver Rules of the road; technical serviceability of the vehicle at the time of hitting.
Practice shows that any opportunity to avoid the collision is treated as violation of traffic rules by the driver.
If the validation checks complete innocence of the driver, the driver is not subject to any criminal or administrative responsibility.
2. The severity of the harm caused to health of the pedestrian.
If the pedestrian suffered serious injury or died, it is one of the grounds for bringing to criminal liability. Serious harm is the state, threatening death, or onset of prolonged and/or permanent disability. The severity determines a forensic examination. If the expert acknowledges the harm caused moderate or mild severity, the criminal case will be denied, even in the presence of fault of the driver, and the material will be referred to the court for administrative proceedings.

The maximum penalty in such cases is imprisonment up to 9 years and a divestment period of up to 3 years.

If the victim suffered harm to health of average weight or easy harm to health, concerning the driver who committed the collision, will be applied to administrative proceedings. Depending on the degree of fault and damage, the court may impose a fine from 2 500 to 25 000 rubles and deprivation of the right to operate vehicles for the term from 1 year to 2 years.

The owner of the vehicle is the owner of a source of danger, in this connection, shall bear full civil liability for the damage caused during the operation of the vehicle. That is, regardless of whose fault the accident occurred, to transport the owner must reimburse the costs of treatment or funerals), lost clothing and other material losses. Release from compensation for damage the court may, if in the process, the vehicle owner can prove that the damage was caused by force majeure or intent of the victim.
Is the advice useful?
Подписывайтесь на наш канал