How to play the game "name that tune!"

The game "name that tune" will cheerfully spend time in the company. It will amuse both children and adults. You can turn the game in the scenario of anniversary, celebration. The main thing – to learn simple rules. 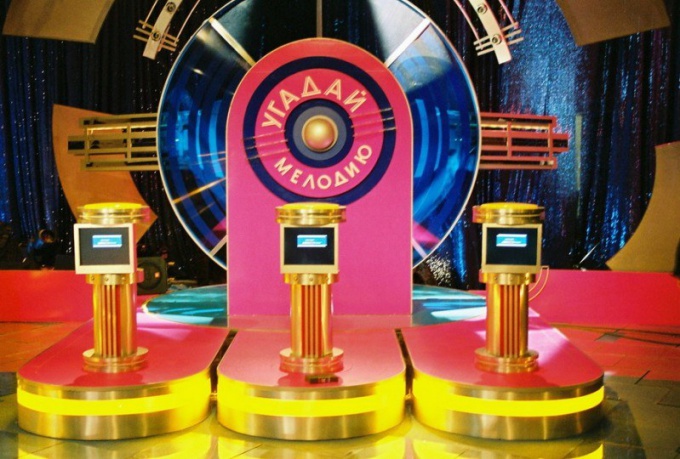 Traditionally, "guess the melody" is played by three people. If the number of applicants is more, you can take a fourth and even a fifth. More participants to invite is not necessary, as then the audience will be harder to watch the action, and leading to count the points. This function can be assigned to another person, that easily adds up and takes away numbers.

First you need to prepare everything you need. Home hard to find 3 stands, so they will perform the function of chairs with backs. Attach them with tape horns or other noise toys, such as children's tambourine.

It's funny to see how the participants would hurry up click on sound toy to give guess the melody.

Music quiz name that tune consists of four rounds. The first warm-up. After summarizing the results of this stage no one is eliminated. After the second round goes the man who has least points.

Take graph paper or a slate and write them one under the other 4 sections. They must touch song genres. Depending on the age and interests of the participants, the names may be different.

The participants of the middle-aged make something of foreign music, Patriotic songs of the 80-ies and 90-ies. The elderly will be interesting to experience the atmosphere of 50-60 years. Let them guess popular waltzes, kind and uncomplicated songs songs of those years.

Children will love to learn songs from cartoons. It can be both Soviet and modern foreign animated films.

Let each melody lasts no more than 30 seconds. During this time participants will have to guess. If not, then the host himself says that it was the song.

As home to invite the whole orchestra to play tunes too, may not all, the rescue ringtones karaoke. Write them down in advance on the computer and turn during a game of "guess the melody".

In each of the four sections, draw for 4 notes. Each will fit a particular melody.

The second round similar to the first. There may be such sections: "Snowfall", "Summer motifs", "guess Gaidai" (songs from his movies), "the hits of Alla Pugacheva". After this round the scores are counted, too.

To the third round only 2 participants with the most points. Here is given more time. While melody, is stopwatch, which increases the number of points for the answer. They are attributed to those who correctly guessed the name of the song.

The last fourth stage – bidding. One of the participants, hearing the assignment, said that, guess the melody and delivers a number of notes from seven to three. The highest bid and the person who said the smaller number of notes.

After one of the participants correctly guess the 3 tunes in this round, he becomes the winner of the game.
Is the advice useful?
Присоединяйтесь к нам
New advices