Diamond is considered the hardest mineral on the planet. He is able to cut glass. Many scientists did experiments, exposing the diamond mechanical and chemical influences. And in the end had found his weak spot: the diamond is able to burn. 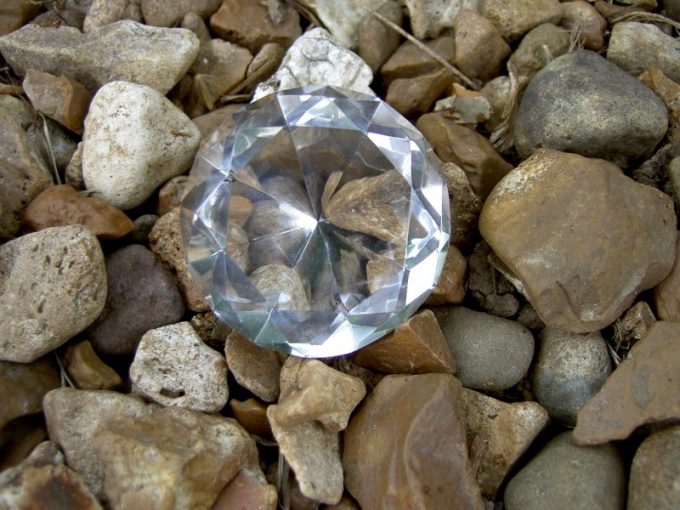 The word "diamond" comes from the Greek language. On Russian it is translated as "insurmountable". And really, to damage the stone, you need to make a superhuman effort. He cuts and scratches all known minerals, while he remains unharmed. He does not harm acid. One day out of curiosity an experiment was conducted in the smithy: diamond laid on the anvil and hit it with a hammer. Iron hammer almost split in two, and the stone remained intact.

Of all solids diamond has the highest thermal conductivity. It is resistant to friction, even on metal. This is the elastic mineral, with the lowest compression ratio. An interesting property of diamond to luminesce in the sun and exposed to artificial sunlight. It glows with all the colors of the rainbows and fun refracts color. This stone like the saturated color of the sun, and then emits it. As you know, natural diamond, the ugly, the true beauty gives him a cut. Gem of processed diamond is called a diamond.

In the 17th century in England, a physicist by the name of Boyle was able to burn a diamond, by a ray of sunlight through the lens. However, the French experience with the annealing of diamond in the melting vessel has not produced any results. French jeweller, who conducted the experiment found only a thin layer of dark patina on the rocks. In the late 17th century, Italian scientists of Averni and Targioni when you try to fuse the two diamonds together have been able to establish the temperature at which diamond burns - from 720 to 1000 ° C.

Diamond does not melt because of solid structure of the crystal lattice. All attempts to melt the mineral was over the fact that he was burnt.

The great French physicist Antoine Lavoisier went further and decided to put the diamonds in a sealed vessel of glass, and filling it with oxygen. With big lenses it heated stones, and they burned completely. Examining the composition of the air environment, they found that in addition to the oxygen it has carbon dioxide, which is a compound of oxygen and carbon. Thus, a reply was received: diamonds burn, but only oxygen, i.e. outdoors. Burning diamond transforms into carbon dioxide. That's why unlike coal after combustion of the diamond is not even ash. Experiments scientists have confirmed another property of the diamond is: in the absence of oxygen, the diamond does not light, but changes its molecular structure. At a temperature equal 2000оС just 15-30 minutes to obtain graphite.
Is the advice useful?
Подписывайтесь на наш канал